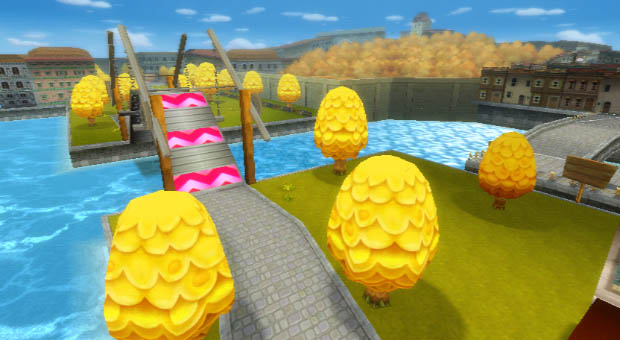 Mario Kart Wii | Nintendo | Wii | Racing party
I gave it: C (I think?) | In retrospect, this was: Tragically correct

It seems Mario Kart games are a tricky thing to create, which you wouldn’t expect to be the case given that every one of them is basically just a variant on the original Super NES game. But whether a given effort succeeds or fails all comes down to the fine details — the specifics of those variations. For that reason, I’m always wary of a new Mario Kart, because it’s better to be pleasantly surprised than tragically disappointed. Sometimes, the surprises are nothing less than fantastic: Mario Kart DS was one of the former, and in fact is one of the best games available for DS. Its Wii-based follow-up, unfortunately, falls into the “tragic disappointment” category.

I’ve written at length about its shortcomings, and everything I said there holds true. In summary: MK Wii compromises the series’ tenuous balance between skill and accessibility by dumbing down its racing mechanics to the point that stupid luck rather than any sort of talent becomes the determining factor of each race. While Nintendo offers some race customization options, you’re only rewarded with any sort of progress if you play the game by its awful default rules. There are two crappy tracks for every good one. As in Smash Bros., “high-level play” basically boils down to exploiting a single, simple tactic that drains the game of any entertainment it might actually have to offer. And some of the new embellishments, like the waggle-based mini-boosts, are straight-up dumb.

In retrospect, though, the biggest issue I have with Mario Kart Wii is that it marked the first volley in Nintendo’s assault on “core values.” Gamers panic about things like Wii Fit and Wii Music, seemingly convinced that Nintendo’s catering to a wider audience is the death knell of gaming. That’s silly. What is alarming is watching the company diminish its long heritage of great traditional-type games, weakening its internally-developed titles and farming out great franchises to developers who lack the creativity and ambition to uphold those series’ quality. Titles like Wii Fit are exciting, forward-thinking attempts to break gaming beyond its stagnant boundaries; titles like Mario Kart Wii are just stagnant. There’s room for companies like Nintendo to cater to both hardcore and casual markets, but the company either doesn’t realize it or doesn’t care.

Of course, it’s unfair to hold a single game accountable for a vast corporate failure. But that’s OK: I can dislike Mario Kart Wii because it’s boring and broken.