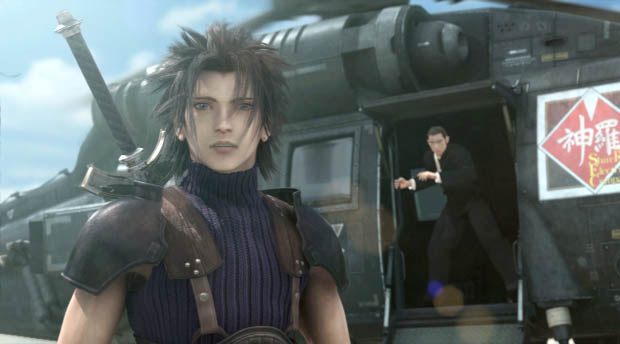 Crisis Core: Final Fantasy VII | Square Enix | PSP | Action
I gave it: B+ | In retrospect, this was: On the mark.

I was certain, before playing it, that I would hate Crisis Core. It looked like everything I hate about video games: all flash, no substance, with a confusing game mechanic substituting for actual depth. Worse yet, it’s basically a Final Fantasy VII fanfiction, and that’s one RPG whose welcome has long since worn itself out. Nothing good seems to come from FFVII: the game itself has aged horribly, the annoying characters are a merchandising empire unto themselves, Advent Children was an abomination, Dirge of Cerberus was nearly unplayable…yeah. There was no reason to expect anything short of pure suffering from the game, and in fact I volunteered to do a second-opinion EGM review on the game just to say I’d put in my dues and suffered through something terrible in order to justify getting my name on the list for more quality material.

Imagine my surprise, then, when I ended up really enjoying the game.

Crisis Core is no masterpiece, but it’s a good, solid portable title. Kind of action-y, kind of role-playing-ish. Story-driven and fairly lengthy, but with plenty of opportunities to take on side projects to kill time, which of course is the ultimate raison d’être for handheld games. It’s a lightweight pop culture snack that eats like a meal, basically…and while I wouldn’t want my entire gaming diet to consist of this sort of thing, a guilty pleasure every now and then is a nice break.

Perhaps most surprising to me was the fact that the FFVII connections actually made me like the game more. There are a lot of things I hate about FFVII, but Crisis Core didn’t really focus on them. Instead, it centered on the good: the interesting world, the elements of corporate empire and conspiracy (something new an unusual for RPGs back in 1997). And it turned many of FFVII’s annoying elements into assets. For instance, the bland Materia system, which was so terrible for its tendency to transform a party of three into identical killing machines, was far better suited to a single character — especially when you factor in Crisis Core’s customization and combination options. I found unraveling the intricacies of the fusion system engrossing, and combining my magical rocks to become even more magical was satisfying and empowering.

Mercifully, Crisis Core downplayed annoying icons like Cloud and Sephiroth; when they did appear, they were far more interesting and fully-realized as characters than they had been in FFVII. But really, Crisis Core focuses on Zack Fairs, who in FFVII only appeared in an optional flashback, despite numerous veiled references to him throughout the story. Zack is basically the antidote to Square’s typical Final Fantasy heroes: he’s good-natured rather than surly, and unlike optimistic characters like Tidus and Vaan doesn’t come off as being dumber than a sack of hammers. He’s a bit naïve toward the beginning of the game, but as the adventure unfolds he actually grows and develops as a character — shocking but true! And the ridiculous superheroic actions that made Advent Children so difficult to watch are lampshaded here: the only time you see genuinely over-the-top action (like Sephiroth slicing apart the towering Junon Cannon installation with his sword) is within the confines of a virtual reality simulator.

Like the game itself, the battle mechanics are a lot better than they appear at first glance. Crisis Core looks like a mindless mashfest on the surface, but that’s really not the case. Its combat system is a sort of inversion of the standard Final Fantasy style; where Active-Time Battles could be considered adding an element of action to a turn-based system, Crisis Core adds turn-based elements to what seems like standard melee action. Every action taken by either Zack or his foes has a certain degree of latency, meaning that simply jamming on the attack button is worthless, especially against powerful foes. Every attack (save for the bosses’ flashy Limit Break-type skills) can be parried or dodged with the proper timing, and executing your own actions correctly will interrupt enemy attacks. The reverse holds true, though. Timing and rhythm are of the essence in Crisis Core, and effective play gives you the ability to go up against foes far beyond your level and still come out on top. And Materia is cleverly integrated into the mechanics as well, allowing you to customize not only Zack’s skills but also his attributes — you can create custom Materia that offer healthy stat bonuses on top of their basic functions. There are even a handful of Materia that change up your basic commands, like turning the rolling dodge into a dash, or letting you leap like a Dragon Knight.

It’s not all perfect, though. Crisis Core suffers from annoying, dated RPG conventions that feel horribly out of place, most notably random battles. Its side missions are incredibly repetitive, and the main missions are painfully linear until you reach the very final dungeon. And then there’s the DMW, the Digital Mind Wave, a series of slot machine reels that spin in the background of every battle for no good reason, dispensing random power-ups. Or stat bonuses. Or even level-ups. Yes, that’s right: Zack’s stat growth is decided (semi-) randomly. It’s possible to manipulate the DMW to a certain degree, and sometimes it will be affected by the story, but it’s still nonsensical and intrusive and is frankly a lousy excuse for a gameplay system.

Crisis Core’s story doesn’t hold many surprises, since it’s a fairly faithful retelling of events presented in the course of FFVII. You know that Cloud will show up, that Aerith has a part to play, that Sephiroth’s going to wig out in Nibelheim, and that in the end Zack is gonna kick the bucket. What makes the game work despite the transparent arc of its plotline is how well the details play out; scenario writer Kazushige Nojima has a reputation for writing touching stories, but this is the first time I’ve really felt the praise was warranted. Zack is a likable character, and — spoiler alert — the climax of his story is one of the most powerful moments I’ve seen in a game, deftly combining narrative and gameplay mechanics to compel the player to keep struggling to grasp some impossible victory despite the obvious futility of it all. As Zack fights to survive and the DMW breaks down while spinning so tantalizingly close to a combination that could save the day, you almost forget how annoying those reels were for the past 30 hours. And that’s a victory in and of itself, really.

That ending is a big part of Crisis Core’s success. So many games start strong but end poorly; seeing a game begin decently but end so powerfully leaves quite an impression. Of course, the coda leaves many gamers clamoring for a Final Fantasy VII remake, but let’s not spoil our happy feelings, OK?