I have a lot of things happening at work right now, and my personal life is also rather busy. And then I’ll be more or less off the grid for a week of Christmas break. So I hope you’ll forgive me if I default to a week or two of lame and predictable blogging here. Yes, I’m going to write about the games of 2008, just like every other hack on the planet. Sorry! But this isn’t some grand and sweeping best of the year proclamation; instead, I’m going to look at some of the games I’ve reviewed for work and second-guess myself. Of course, I took a break from reviewing a few months ago, so don’t expect to see much of the fall rush. Think of this as a retrospective on the first half of 2008.

Let’s begin near the beginning with one of the year’s best and most underappreciated games.

Shiren the Wanderer | Sega | DS | RPG/Roguelike
I gave it: B+ | In retrospect, this was: Too low.

Shiren is the sort of game that, by nature, can’t seem to get a break. That’s because its nature is one of daunting, codified challenge. The roguelike is a sadly misunderstood niche, and while a few good people (like GameSetWatch’s John Harris) are fighting the good fight by promoting roguelike awareness, the fact is that most gamers — especially those with a console heritage — mistake roguelikes for standard RPGs and are infuriated when they don’t work like your typical role-playing adventure. But they don’t! And that’s the point. A roguelike is entirely about the journey, unlike most RPGs which are about the destination and the tedious grinding necessary to get there. Roguelikes break the level-up mentality; while stat boosts are necessary, a good roguelike prevents you from spending too much time killing monsters for experience, either with hunger (forcing you to seek food at all times lest you starve) or by simply forcing you out of the current dungeon level by more aggressive means. Roguelikes start you out at zero for each journey and challenge you to reach the end with only what you can find. It’s basically RPG as arcade game: each playthrough is self-contained, designed to be challenging and not necessarily to be conquered. The point isn’t winning so much as learning all the ins and outs and improving your previous performance. Roguelikes can be difficult, often near-impossible, but thoughtful planning and cautious play will eventually see a persistent adventurer through to the end. 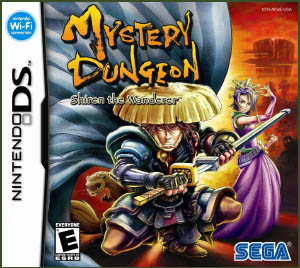 And Shiren is a damn fine roguelike, although Sega did its best to scare people away before they even played the game. Look at that box art — it’s like a reject from the ’90s. The bad part of the ’90s where publishers were allergic to anime-tinged artwork and insisted on airbrushing large, ugly old men in place of the lithe heroes seen in-game. Don’t be frightened, gamers! Shiren is intimidating, but not for the reasons the box would suggest.

Of course, the Internet being what it is, some people are more concerned about semantic nonsense than actually discussing the game’s merits. “Shiren can’t be a roguelike because you can carry over items from one play to another! And there are persistent changes in the world!” But that’s part of what makes Shiren fun and accessible. It’s insanely difficult and ruthlessly unforgiving, but at the same time it rewards you for repeated play by allowing you to bend certain game elements in your favor. The girl who tricks you in one of your first playthroughs, leading you to stumble blindly into an early deathtrap, eventually comes around and becomes an ally. Help the struggling restauranteur over time and eventually he’ll offer invaluable help before you embark on the deadly final floors of the dungeon. Slowly forge and improve a weapon or shield in storage and after a while it will become an incredibly powerful asset. But of course even this comes with risk: that super-sword might improve your chances in the dungeon, but die with it in your possession and it’s gone forever — all that work flushed away in an instant.

What makes Shiren so addictive is this give-and-take design, the constant drive to go forward even though you’re constantly pushing your character to the brink of defeat. You can’t play Shiren like a typical RPG; hoarding items is folly, because you need to use them to survive, and if you don’t survive you lose them anyway. You can’t count on always finding the gear you need when you need it. You can’t count on the enemies always behaving exactly as you predict, because while they have clearly-defined abilities the game features ample randomization that affects their relationship to the (ever-changing) environment and to the player. And sometimes the game unexpectedly throws you for a loop — not every situation you find yourself in is winnable. That’s where much of the frustration with Shiren comes in, I think, but the point of Shiren isn’t to win every time you play. It’s impossible. Rather, the goal is to learn from your mistakes, learn to anticipate what the monsters will do, learn how your equipment can be used to your advantage. Learn the game, keep trying, and eventually when all your ducks line up, you’ll be able to utilize your good fortune to the fullest. Shiren embodies the premise of an interesting article Gamasutra recently published; like Mega Man 9, Shiren is an experience that focuses on betterment of the player rather than of the player’s in-game avatar.

Unfortunately, most gamers aren’t interested in self-improvement, and Shiren tanked, so we won’t be seeing its (even better) sequels. Personally, I’m just glad Sega was willing to take a chance on publishing this one in the U.S. to begin with — it’s easily one of the most compelling (and brilliantly designed) games to see release this year. Never mind that it was originally released 15 years ago on Super NES; great design is timeless.