Volume 10 of Battle Angel Alita: Last Order is finally out, and thank goodness for that. 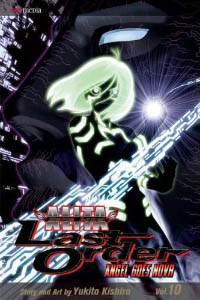 For those unfamiliar, Last Order is a continuation of the excellent Battle Angel Alita manga, which Viz published from roughly 1994-1999 or thereabouts. The second volume, Tears of an Angel, was the first manga I read, and it instantly hooked me. It probably unrealistically raised my expectations for manga, too, because it was a fantastic change of pace from the hackneyed American superhero comics I’d grown so tired of. Eventually, I realized that manga’s every bit as trite and hackneyed as anything from America, but I just happened to stumble into something well above the average to start me out; my first sample presented a skewed data point.

With Vol. 10, Last Order has officially run longer than the series it continues — although actually, that happened midway through Vol. 9, since the new series retcons the second half of the ninth volume of the original story. The first Alita series ended on a pretty unsatisfying note: the original story concept began as the Ouroboros dream sequence featured across volumes eight and nine and grew from there, which made it the story’s true climax; the Japanese title for the series is even GUNMM (Gun Dream), for crying out loud. Everything after the Ouroboros is an anticlimax, all the worse for having been penned by Kishiro in a sporadic rush due to illness.

But honestly, Last Order hasn’t been that much of an improvement over that original ending. After a fairly strong start, it degenerated into a messy, overly-complex saga featuring that hoariest of padding techniques: a fighting tournament. And the eighth and ninth volumes were even further off the rails, depicting an extended flashback about a secondary character that, while important, really should have been wrapped up in about 50 pages. Tangents are fine when they’re wrapped quickly, but it’s been a full year since Vol. 9 saw print, and the book has felt stagnant for years now. So if Vol. 10 hadn’t stepped things up, I was planning to give up and pretend Last Order never happened.

Having read Vol. 10, it looks like I’ll be picking up Vol. 11 after all. This latest chapter isn’t perfect, but it’s definitely a huge improvement over the past five or six books. This book brings us back to the present, and — more importantly — back to Alita’s story. She’s been hanging out in the supercomputer Melchizadek for a couple of years now, so it’s nice to see some closure. The two previous books were basically the backstory behind Melchizadek for a reason: the computer becomes the crux of the plot here. The role of Melchizadek, the relationship of Earth to the rest of the solar federation and even the secret of the mysterious F Box that Alita’s been carrying around since volume one finally come out here, which offers a very welcome sense that the story is starting to gel at long last.

More satisfyingly, core characters start to play a decent role again. Kaos puts in an appearance, along with the survivors on Tiphares and more Desty Nova than you might think possible. Nova has always been the primary villain of the Alita series — although villain probably isn’t the right word, as he’s not really evil so much as a completely amoral scientist whose only ambition is to study the role of karma and fate under the worst possible conditions. Nova’s been out of the picture for a while, but it was obvious that Kishiro was planning to bring him back (since Nova was essentially made immortal with a nanomachine gambit that makes Hideo Kojima’s nanogimmicks look like sheer amateurism); his revised role puts a new twist on his usual antics without changing his basic character of being a heartless bastard.

What really makes this volume work is that it’s finally back to being quintessential Alita, good and bad. A fair chunk of the story is given over to Alita’s companions having high-falutin’ philosophical face-offs with the bad guys: high-stakes Nietszche debates. Alita’s duplicate Sechs has a classic Kishiro one-on-one showdown with a superior opponent who’s basically a gimmicky personality tic given flesh, a conflict that consists of the opponent posturing while Sechs soliloquys in desperation but nevertheless finds himself earning sufficient regard that his new rival will take hims seriously in their next encounter. And ultimately, the book ends with Alita experiencing both a newfound sense of self and a profound existential crisis.

This last element is what really makes me think, yeah, we’re back on track again. Alita is pretty much the world’s most powerful cyborg drama queen, and her dramatic emotional upheavals have always been the crux of the story. Whether flinging herself headfirst into bloodsport to escape a broken heart or devoting herself to the redemption a beloved friend who no longer remembers her, Alita’s volatility is what keeps the story moving. All these tournaments and flashbacks are just distractions from the true heart of the series, and Kishiro finally pushed aside the crap to get back to the noble business of putting his tiny, pouty robo-heroine through the wringer. Sure, the grim spectre of the Zenith Of Things Tournament (ZOTT) still hangs in the background, but it has a purpose now. And so does the series. It’s about friggin’ time.