Earlier today I found myself thinking about Secret of Mana (which I first picked up 15 (!) years ago and played to completion over the course of three rentals during Christmas break, 1993). I started thinking about how much I miss games like that. Specifically, thinking about how much I miss the ineffable comfortableness unique to games of that vintage. And I’m not talking about a factor of nostalgia, but rather of game design. Despite featuring a fairly involved leveling system, Mana was brisk and easy to play; very little time was spent setting things up and jawing on about the grim fate threatening the world. You fell off a log, found a sword and were causing Rabites to get whacked in a matter of minutes.

Video games these days, though — especially those of the RPG ilk — they rarely manage that. I was happy when the first thing the developers of The Last Remnant told me the other day was that the first three hours of their game is an engaging and exciting — an attempt to draw players into the game world immediately. (Then Christian Nutt and I started complaining about Tri-Ace games, which never start out quickly; this caused the Tri-Ace rep at the table to clutch his face in mock horror and apologize. Good times, good times.) Still, it’s all well and good for developers to promise that, but few seem able to deliver. That’s one reason I like Etrian Odyssey so much — once you set up your guild, it’s straight into the thick of things for you. But such games are few and far between; the majority prefer to jaw your ears off and text your eyes out.

And then, a Christmas miracle: not 10 minutes after I was dwelling wistfully on the breezy stylings of Mana, an import copy of Avalon Code landed on my desk. 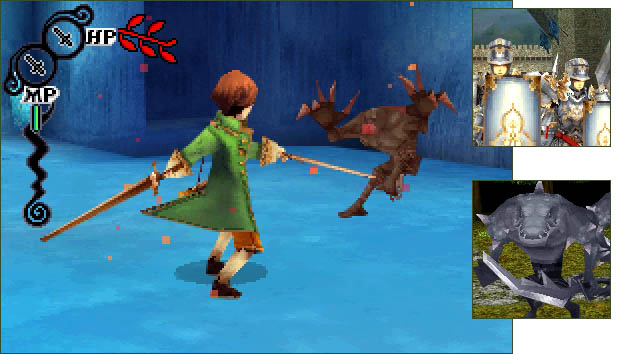 I was pleasantly surprised to boot up the game and find very little time was spent in tedious exposition. There’s an intro cinema, sure, but it’s part of the credits, and it’s beautifully rendered — reminiscent of the intro to Lunar 2, not least of all due to the glyphs that play prominently in the video sequence. Within a few minutes, I had control of my character and was beating the crap out of foes. That’s…wow. That’s nice.

But what’s even nicer is the fact that Avalon isn’t another of the low-budget anime crapfests that plague the Japanese RPG genre. Story sequences seem brief enough, but they’re rendered in 3D with actual character models interacting, not just half-hearted voiceovers atop static illustrations. I had high expectations for the game, of course, given that it’s the work of Matrix — essentially the Final Fantasy III/IV remake engine being used for a completely new work that plays out as an action RPG rather than a turn-based system. Happily, Matrix seems to have applied the same care and effort present in their Square Enix projects for Avalon to create the DS equivalent of a big-budget game. Maybe the rest of the game won’t hold up, but at the very least it starts off well.

What that translates to is the sort of thing that would have been a must-play 10 years ago on PlayStation…except without the load times. If anything, Avalon reminded me right away of Threads of Fate, which is a good association to make — action RPG, solid 3D graphics, choice of a male or female playable character. And to bring everything full circle, Threads always reminded me of Mana. Which means it looks like I may have been given the spiritual Mana successor I was pining for in a matter of minutes.

Seriously, the truth? This is getting so uncanny that I’m starting to frighten myself.