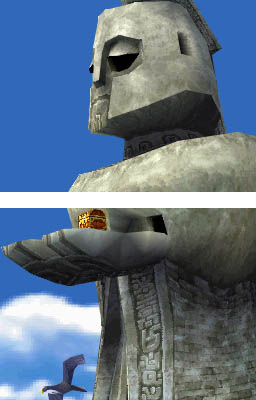 I’ve been replaying Dragon Quest IV over the past week, since I didn’t really get to enjoy it when I reviewed it. I never even touched the bonus chapter, and I missed out on lots of interesting alternate strategies since I didn’t know about a lot of the optional or non-obvious weapons in the game. I missed Meena’s tarot cards, Alena’s double-attack weapon, all kinds of stuff. This time around has been much more enjoyable.

I faced off against the Marquis de Léon a few days ago, which was one of those standard RPG battles where you fight a horrible malformed monster who reverts to the form of a mere confused and apologetic human once defeated. (Given the original game’s vintage, this was almost certainly one of the early pioneers that helped establish this particular twist as a cliché.) And weirdly enough, watching John McCain’s concession speech last night gave me flashbacks to that battle. Here was the gracious, eloquent, let’s-rise-above-this-pettiness McCain that I so admired in the two previous elections, the one who was replaced sometime last year by a venal, hateful practitioner of the dirty tricks, neo-con policies and petty character attacks he had long stood against. Once defeated, though, he reverted to his true form, seemingly humbled and respectable again.

It’s nice to have him back. But don’t stop level-grinding now, Mr. President-Elect. You still have to defeat the true final boss: Karl Rove.

There’s been a rather jubilant feel in the air and online since last night; the streets of downtown San Francisco were eerily deserted at 7 p.m. yesterday, presumably because everyone headed to bars and parties to watch the results. My girlfriend’s cousin unexpected burst through our door last night around 10, tipsy and giggly and with a huge lipstick mark on her cheek, just so she could give us drunken, celebratory hugs before staggering home. And Talking Time is basically a bunch of nerds giving each other drunken, celebratory e-hugs. I realized last night that a lot of people reading this site have never actually experienced the sensation of having a president they can actually respect, never participated in an election that went the way they wanted and wrapped up tidily with (hopefully) no protracted legal stupidity or cries of stolen votes. So I can definitely understand the excitement in the air.

But let me please caution you to be rational and polite in your excitement. Take your new president’s platform of unity to heart and don’t be an ass to people who supported the other side. Speaking as someone who had the dubious pleasure of sitting through two Clinton victories and a Gore loss while nestled deep in the intensely conservative heart of Texas, I can say with confidence that nothing is more annoying than a bunch of self-righteous, gloating goons crowing about an election that didn’t go the way you wanted. Be excellent unto one another was one of the rules of conduct posted yesterday, and I meant it. Also, don’t be surprised if four years from now the whole world isn’t suddenly a magical place. I’m sure we’ll be largely out of the Middle East by then, and hopefully we’ll be making lots of progressive strides — I’m very excited about the prospect of an administration that might actually sign the Kyoto Protocols! — but the larger economic malaise the world is facing is hardly a Bush-exclusive gift to the world, having been set into motion by policies that were enacted 25 years ago (and, it should be noted, which were hastened along by one W.J. Clinton). I imagine it’ll be a decade or more before things get really and truly better.

I was going to end this with a remark about “this is getting needlessly messianic,” but then I remembered that the hero/heroine responsible for defeating the Marquis de Léon was actually a chosen one. So I guess my analogy isn’t really helping matters much. Anyway, here’s to the next eight (?) years: may they be as constructive as everyone hopes.