If you are an American over the age of 18 and are registered to vote, you’d better go out and friggin’ do it today. Or I’ll jump on your back and punch your skull until candy comes out.

Me, I was actually a pretty big fan of McCain in the 2004 election, but since he’s running this year on basically the exact opposite platforms of the he advocated back then I guess I’ll be voting for Obama. He’s not perfect by any means, but even so I think I might have voted for him even if I hadn’t generally agreed with his stances and politics simply because of what he stands for. And I don’t mean the fact that a self-made mixed-race public servant who’s spent significant time in the world outside of the U.S. is a tidy summation of what our country is supposed to be about (although that’s pretty compelling!); I also mean that he’s the only candidate who seems to recognize that America is not some towering, invincible colossus that can stride through the world with impunity. The past few years have shattered that particular illusion, I think, and the wild economic woes of the past couple of months have shown just how connected every nation is. We’re all in this together. So I like the idea of having a president who respects the rest of the world and actually sees talking to them as a better solution that shouting at them from a threatening posture. That seems like it would be the sort of country I could feel confident about living in again.

I’m sure everyone who doesn’t share my views is sick of being shouted at by angry liberals, who tend to be pretty strident here in the world of blogging. So I’ll spare you that. All I really ask is that everyone votes who can, and that they make an informed decision about their choices — whatever those choices may be. If you’re still unsure about what’s what and which of your state propositions to support and so forth, check out this site. It’s detailed and neutral and links to some informative breakdowns. Please don’t just vote straight-ticket unless you’re sure that you really mean it. Both of the major parties are horribly flawed, and until politically conservative Republicans break away from the intolerant reactionary rot that’s taken over the party and Democrats with a spine decide to move en masse to create a party that actually believes in getting things done, it’s always smart to research the alternatives. For instance, I may be a registered Democrat, but I vomit at the prospect of voting for Nancy Pelosi, who went from “fiery” to “useless” the moment she became the majority leader.

Anyway, vote, and be a smart voter. This is your only social obligation as a GameSpite reader. Well, that and “be excellent unto one another.” And…party on, dudes. So that’s three obligations. But I think you can handle ’em.

Edit: I have put my money where my mouth is! And looked damn nerdy doing it. 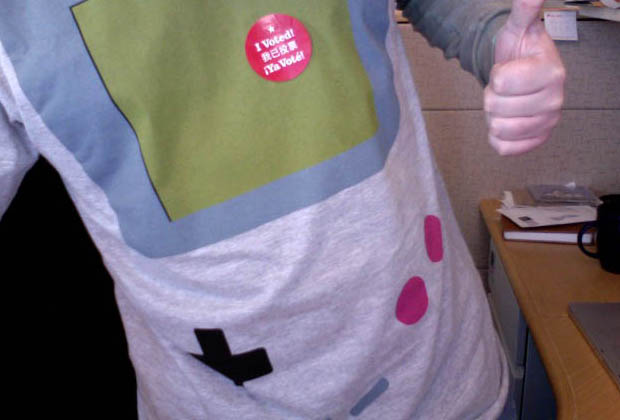 42 thoughts on “Another nagging voice”