The tawdry lie that was my youth

Well, I’m back in the States. I know this for a fact because the first thing that happened upon my arrival was the traditional United Airlines Omelet of Shame, the slightly nauseating robo-egg football stuffed with plastic vegetables that you eat anyway because it’s been six hours since your last meal. (This is the airline’s way of taunting you.) That was soon followed by a cab ride wherein I became stuck in traffic with a cabbie who loved him some Rush Limbaugh. You’d think he might realize that Limbaugh isn’t really the best friend of immigrants of apparent Middle Eastern descent, but I guess not.

I fought against jetlag by forcing myself to stay awake until my normal bedtime all day despite only sleeping an hour on the plane — not entirely successfully, since I ended up waking up at about noon anyway. I fought the good fight regardless, primarily by (1) going to work, (2) watching Dr. No and (3) making use of one of my shiny new toy. 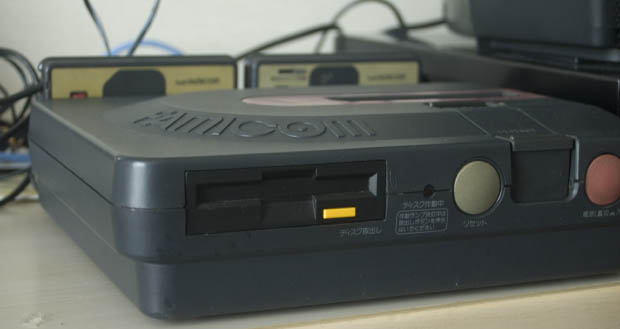 Ah, OK, it’s not really shiny, per se, what with its matte black finish. And I guess it’s not really new, either. But I’ve wanted a Famicom Disk System for years, and watching Vs. Excitebike at PAX cemented my determination to finally jump in. I’ve sold off nearly my entire game collection over the past six months (and managed to pretty much pay off all my debts in the process), so I figured I could afford a small indulgence while I was abroad. Thus: a Twin Famicom. Perhaps not as cost-effective as a Famicom and separate disk system, but oh so much more awesome.

Unfortunately, there has been a terrible downside to ownership. And no, it has nothing to do with the belt, which works just fine, thanks.

No. Rather, my childhood has been revealed to be a terrible, empty lie.

See, now that I own a Famicom Disk System (or at least the means to play its games), I decided that the right thing to do would be to build a library of titles that are somehow superior in their Famicom incarnations over the NES releases. Likewise cartridge-based games that are simply better in their Japanese versions. That includes Metroid and Zelda II (which made use of the FDS’s extra sound channel for different music) and Castlevania III (which made use of three additional sound channels for vastly better music). I was prepared, intellectually, for the difference the additional music would make. I was not, however, braced for the hollow sensation it would leave me with.

See, it’s not just the music that’s different. Yeah, Metroid on Famicom Disc System has better tunes to be sure — usually a harmonizing counter-melody to the current theme — but other things are subtly different as well. The music that plays when you collect an item seems more triumphant; the sound of doors opening is less like a whoosh and more like a mechanical ratcheting sound. (Though interestingly, Super Metroid chose to mimic the sound from the U.S. version.) And there’s no question that Castlevania III has vastly superior audio in its Akumajou Densetsu incarnation, but I wasn’t braced for how much better. I also wasn’t prepared for the other improvements the VRC6 chip allowed beyond mere background melodies; sound effects have reverb, for one, and the game is even more graphically impressive than its already top-notch NES counterpart. More color in the background, more animation for moving elements like gears (which move with nearly PlayStation-level fluidity in Grant’s tower), different enemies. I just about wet myself when I went to face down some fleamen and got an army of freakishly fanged leaping gargoyles instead.

And like I said, the net effect of this has not been wow what an awesome new way to experience favorite games!, but rather to rip the veil of deceit from the filthy lie that was my childhood. Suddenly all the games I loved have been revealed as flimsy shams — counterfeit junk that pales next to what kids on the other side of the ocean were enjoying. It’s like learning that Santa was actually real for other kids, but that in my home it was just my dad who ate the cookies and milk we left out every Christmas Eve.

Who knew video games could be so demoralizing?

19 thoughts on “The tawdry lie that was my youth”