Did you do it? Did you make the tragic, terrible mistake of buying the dreaded…Roll Head? 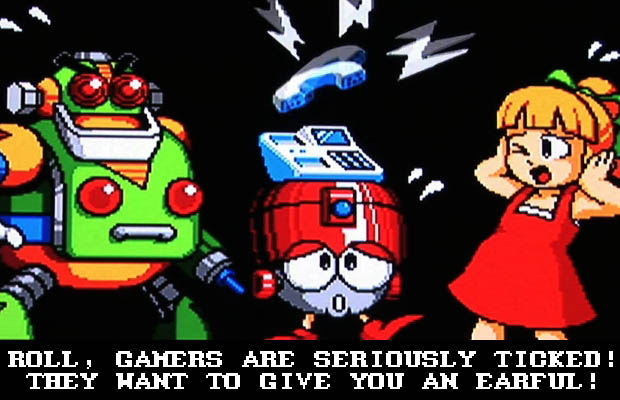 Far and wide, I’ve seen the Internet lamenting the folly of the Roll Head. “It was 200 bolts!” cries many a jilted gamer. “I figured something so expensive had to be good! I thought maybe it would let me play Mega Man 9 as Roll! But…all it does is change Roll’s costume in the menu screens to give her a black jacket over her dress.” Bitter tears have been spilled over this expensive mystery item in Auto’s shop — a useless, cosmetic piece of nonsense whose acquisition is quite possibly the biggest mistake you could possibly make while playing MM9.

I think it’s likely that the Roll Head might even trump the infamous Chrip-Chrip Shoes from Board Game: Top Shop as the single biggest unexpected screw you in the history of games with commerce. (The occasional boneheaded shenanigans of MMO publishers notwithstanding.) For those who didn’t play Top Shop — that is, most of you — it was, as the title suggests, a board game similar to Monopoly, and earnings could be used to buy goodies in the shop. Most of them had obvious benefits, but one of the pricier items was the mysterious “Chrip-Chrip Shoes.” What could they be? Bedeviled with curiosity as we played the game, Jess finally decided to buy them, hoping for some sort of competitive advantage. What he got was…a pair of shoes that made his character emit tiny bird-sounds as he walked around the board. And nothing else. They were Chirp-Chirp shoes, mangled by the translation difficulties that plague a $10 video game. Yes, all that effort wasted on a tragically mistranslated bit of useless footware.

As far as I can tell, everyone who has ever played Top Shop has experienced the horror of discovering the true nature of Chrip-Chrip Shoes for themselves. And I figure the number of people who will heart-wrenchingly discover the truth behind the Roll Head has got to be a few orders of magnitude larger than the paltry handful who have even heard of Top Shop, meaning Capcom has created far more pervasive and widespread suffering. And that is awesome.

Although I suppose I might feel differently if I were the one buying the damn things myself. Thanks for sparing me the pain, suckers.

In other news, I had a dang good interview with the producer of Valkyria Chronicles the other day and it is now online for your enjoyment.

20 thoughts on “Roll Head is the new Chrip-Chrip Shoes”