I spent the weekend visiting friends in Southern California, and as usual, we ended up playing a lot of games. Highlights included Castle Crashers, Rock Band 2 (much more on this later, I’m sure), and a game called Pure. Haven’t heard of that last one? Neither had I. To bring you up to speed, Pure is an ATV racing game developed by Disney Interactive. It’s also totally awesome. (If you’re planning to stop reading now, please, let me assure you I don’t intend to gush about a racing game.)

To set the record straight, I’m not a big racing fan. I rarely buy racing games outside of Mario Kart and can really only get into arcade racers — which Pure definitely is. Even then, they almost always fall into the “rental” category for me. With that being said, in my limited experience with both, Pure is every bit as good as Motorstorm is. So why hadn’t I heard of Pure, but knew all about Motorstorm? Marketing, of course. 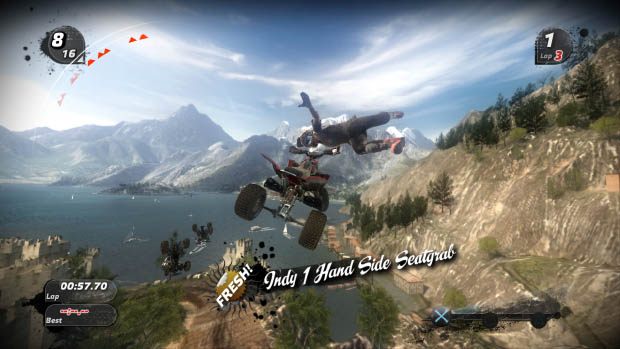 Call me naïve, but I like to think a great game’s quality will shine through, and magically by word of mouth, it will be a sleeper hit. Just look at how BioShock went from “a potentially cool FPS” to “not to be missed, regardless of genre”. Even Atlus games like Persona 3 or Etrian Odyssey developed their own cult followings. Maybe the problem is two-fold, and the genre is to blame, too? Are we just more predisposed to look for “hidden gems” within certain types of games, but not others?

Either way, Pure’s performance this year compared to the next Motorstorm’s should make for an interesting experiment — create two (nearly) identical product, market the hell out of one franchise and say nothing about the other, and see what the public perception on the two ends up being. I’m skeptical of developers like Jonathan Blow shooting their mouths off before their game even comes out, but now I’m seeing that’s just another form of increasing public awareness. As much as I hate the hype train, it seems to be a necessary evil. Meanwhile, here I am, sitting down to jot out a quick post about the power of marketing, and now I’m seriously wondering what else I’ve been missing. Maybe I should watch those “Blink-and-you’ll-miss-it” posts more closely.