Welcome to the world of yesterday

Today, I conquered the front page of 1UP with new old stuff: namely, Wario Land: Shake It! and Gradius ReBirth. And that one Mega-something game that people keep talking about, the Krion Conquest rip-off. 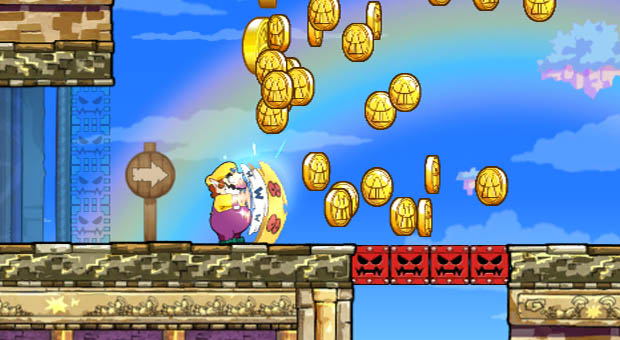 Anyway, I figure all the gushing I’ve done about Mega Man 9 is karmically balanced by these two pieces, both of which are fairly positive but mitigated with a noticeable tinge of disappointment. I’ve already seen some angry responses to the Wario Land review, but I am a mere messenger here. I can definitely respect anyone who is willing to embrace the game, because it is wrapped up and presented in an opulent, gorgeous visual style that truly deserves to be seen in motion. But, on the other hand, I just can’t give it an unqualified endorsement, because it’s a console title whose level designs and mechanics represent a step down from a seven-year-old portable game. That’s seriously backward.

I think there’s also a temptation among people like us (that is, myself, and anyone who is prone to read this site) to give Wario Land a better score just because it’s so pretty. But that is fatal in its irony: we are the same people who snarl in irritation when people write off games like this because they’re not in 3D. Graphics whores, we call ’em. But graphic whoredom works in both directions, and I kind of feel that giving Wario a free pass just because it’s so lovely would be terribly irresponsible for those of us who have ever fumed to see good old-fashioned games dismissed for their lack of polygons.

Wario Land’s failings are a real letdown, because I was absolutely in love with the game after finishing the first world. I compared it to Yoshi’s Island DS in my review for a reason, though: about halfway through, you realize it imitates a great game from a few years back a little too closely and doesn’t add anything worthwhile to the mix. So, if you’ve just reached the second world and are thinking, “Man, Parish, you idiot, you blew it again!” do me a favor and finish the game. There’s a reason reviewers are supposed to complete their assignments before writing anything, and this game is a fine example. My feelings after an hour were very different from my feelings a few hours later. An hour into the game, I had the better part of a sweeping editorial chastising those who shriek with shrill complaints that Nintendo has abandoned its loyal fans planned out in my head; a few hours later, I was the one shrieking. Alas!

There’s a certain poetry in Wario Land being released in such close proximity to Mega Man 9. The former has a vivid, modern look yet suffers a stultifying lack of creativity; the latter looks dated and primitive but is bursting with clever design and fresh new takes on an old standard. They are like yin and yang, except less likely to be co-opted as a logo by a surf company. Anyway, that’s where my score is coming from. But hey, if you still like it once you’ve finished, congratulations: you’re not yet a cynical husk of a human, and I envy you.

17 thoughts on “Welcome to the world of yesterday”