The Blink-And-You’ll-Miss-It Files #2: Mazes of Fate

Hey guys, can you believe it? Mazes of Fate DS actually arrived. I had plenty of skepticism as to whether or not it would, to be honest; its publisher is the absolute epitome of “fly by night” operation. I’ve tried contacting Graffiti Entertainment several times to arrange coverage of their games for 1UP, and in every case have met with failure. Their emails bounce, their web-based feedback forms time out and fail, their phone numbers are disconnected. Shady doesn’t begin to describe it. 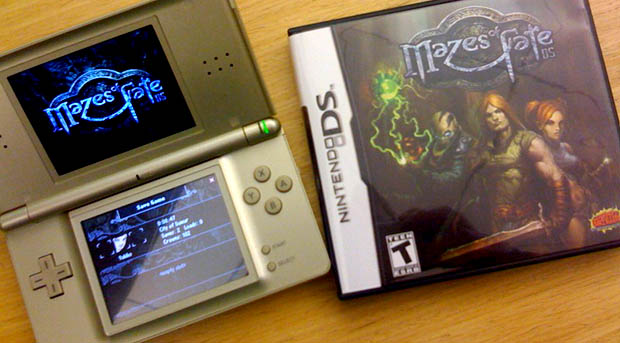 But they clearly do exist, even if they have no interest in making themselves accessible to media who might actually be interested in spreading word of their products, because here’s the game. I’ve been looking forward to this release since I first heard about it, although I rather doubt that more than a handful of gamers have shared my anticipation. It’s very much an under-the-radar release.

In fact, it’s a remake of a game from two years ago, a 3D update of a Game Boy Advance RPG that was sold almost exclusively via eBay. It’s a shame that it received so little exposure, because it’s not a great game by any stretch of the imagination, but it’s definitely decent. It was also quite flawed in its original incarnation, though. I intended to review it for 1UP, but encountered a game-halting bug that prevented me from completing the quest. Hopefully, that won’t be an issue this time around. Certainly this is no straight port — developer Sabarasa has gone and fitted its clunky GBA game with a decent 3D engine. They’ve also expanded the playable roster of characters; I think you could pick from 3 or custom-build a warrior in the original, but now there’s something like seven characters. Each, of course, has various strengths and weaknesses. I’m going with a lady named Katja for my playthrough, as I tend to prefer weak but dextrous characters… and I learned in the GBA game that you can save a lot of money and trouble with a thief-type character as they tend not to go through expensive lock-picks as quickly as the bruisers.

So what’s the big deal about Mazes of Fate? Well, for one, it’s the first Argentinean-developed game that’s ever reached the U.S., so far as I know. But more importantly (well, for me — maybe not so much for the nation of Argentina) is that its first-person exploration whetted my appetite for more portable RPGs of the kind. When a preview ROM of Etrian Odyssey showed up at the office a couple of months later, I was better poised to appreciate its subtleties.

I’d describe Mazes of Fate as the mid-point between Etrian Odyssey and Orcs & Elves — nothing fantastic, but certainly worth an RPG fan’s time. Naturally, Graffiti would go and ship the same week that Dragon Quest IV, the biggest DS RPG in ages, arrives. I’m pretty sure they want that game to fail, because given a choice between the two I definitely have to recommend DQIV. Honestly, though, I feel almost guilty bringing their game to your attention. After all, this post might actually encourage you to buy it, and then the publisher might actually make a little money for their efforts, which is clearly not part of their business plan.