Sure, times are tough, but I managed to put aside a double-sawbuck for something completely useless anyway. Hasbro was kind enough to create it specifically for me, so I figured I owed them the courtesy. I’m speaking, of course, of the G.I. Joe DVD Battle Pack set. Apparently there will be five of these, but this one, The M.A.S.S. Device. This is the one that matters. 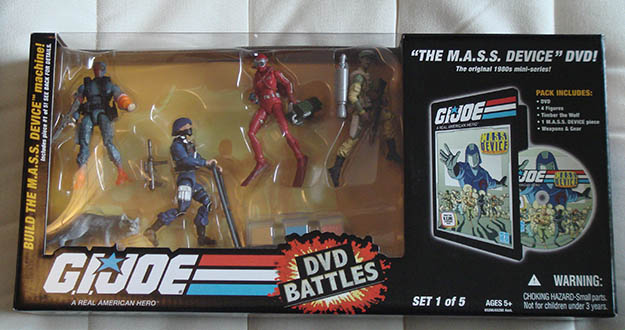 Remember when figure sets used to come in compact blister packs or small boxes? Apparently no one buys those, or something, because now toys like this all seem to come in massive display-window boxes. Vehicles seem to be even worse, since they all apparently come completely pre-assembled now, with the stickers applied. That’s pretty much half the joy of buying a new toy down the drain, right there. And I feel like these jumbo boxes should be a wash in terms of profitability, since fewer of them can fit on a shelf at once than toys of years past, but what do I know? I’m not some faceless suit using science and spreadsheets to determine the most efficient means of wringing every last cent from America’s children, I’m just a dope with an overdeveloped nostalgia gland.

And man, does this thing stab at my nostalgia gland. With surgical efficiency, in fact. 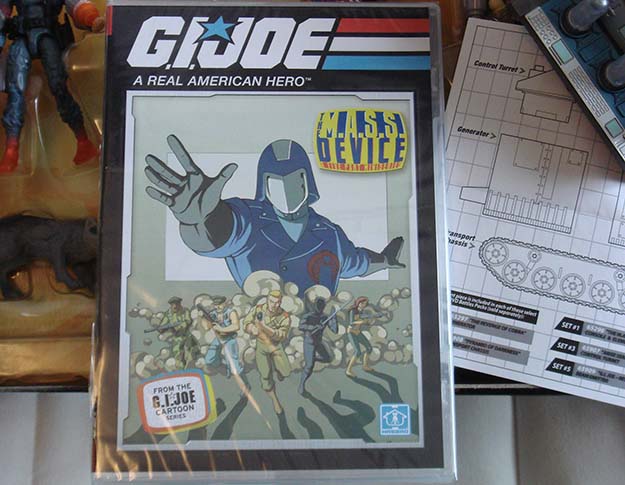 The premise here, of course, is that Hasbro has effectively created miniature renditions of elements from the G.I. Joe cartoons that aired 25 years ago. I’d come home after school and watch these with utmost devotion, and somehow a team of sculptors has managed to fire a laser into my brain to stimulate those memories. I see this set and immediately have a vision of myself sitting in our living room in front of our huge new color TV (it was at least 17 inches, way bigger than the black and white set it replaced!) and wondering how Duke was going to avoid having his face punched in by the big dude in the loincloth. Later, I’d go outside and dutifully play with my friends, secretly feeling smug that the sole two G.I. Joe toys I had been able to afford to buy for myself just happened to be ones revealed to be completely awesome by the T.V. series: Destro and Snake-Eyes. Sure did suck for those guys who owned the boring greenshirt schmoes.

It’s really kind of insidious and alarms me. But, hey, what’s twenty bucks between friends? Or rather, between predator and prey.

The set comes with a slim-case DVD compiling the entire M.A.S.S. Device mini-series, which of course I will leave shrink-wrapped. This is not because I think the stand-alone DVD will ever have any value whatsoever, but rather because I realize that if I actually watch the cartoon, which is completely stupid and terrible for any sane adult, my nostalgia gland will wither and die forever. And then I’ll be out of a job. 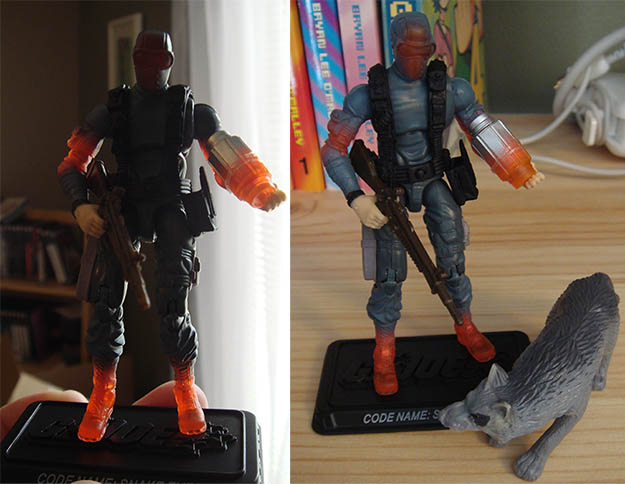 The pièce de résistance is the Snake-Eyes figure. Despite the fact that roughly every third figure Hasbro makes is a Snake-Eyes and I already own, uh, one or two, this one is brilliant. It’s exactly the same mold as the other Snake-Eyes I have on my bookshelf, but recolored in a completely fantastic way to resemble fatal radiation poisoning. The orange bits are molded in clear plastic, too, so if you are insane or obsessive you can display him with light shining from behind to make him look radioactive. (Don’t worry, it’s nothing a nice warm herb bath won’t cure.) The attention to detail is admirable, though — they left his hands bare for this version, just like on the show. I never quite understood the logic behind that, but I won’t presume to criticize cel painters who were probably being paid pennies a day for their troubles. 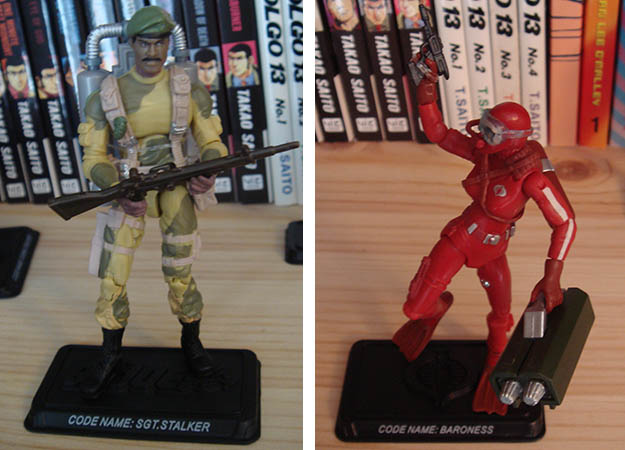 The set also comes with Stalker and The Baroness, which…OK, why not. Stalker looks like he’s the same as the one they released last year (which is actually just Snake-Eyes with a different head and web gear), except now he has a jet pack and an eye-searing color scheme intended to represent the gaudy primary tones of afternoon cartoon ink and paint, I suppose. As a nice touch, he and Snake-Eyes are both carrying what seem to be the generic laser rifles everyone on the show fired futilely at the bad guys. I don’t know my real-world guns, but I’m going to assume these aren’t based on anything any real army would ever use.

Baroness is more interesting, simply because this represents a very, very specific version of her from a single episode of the cartoon. But really, that’s what appeals to me most about this, I think. When I was a kid, because I was an anal-retentive nerd even at age 8, I was always irritated by the fact that the toys and the comics and the cartoon all existed in their own unique little worlds where nothing really coincided. Duke was always making out with Scarlett in the cartoon, but in the comics she had a depressing, dysfunctional relationship with Snake-Eyes instead. To say nothing of the characterizations — like, how Bazooka’s file card described him as a tactical genius and ballistics savant, while he was just some background nobody in the comic and couldn’t even form a coherent sentence in the cartoon. Actually, the cartoon was kind of depressing in that regard, since these guys were supposed to be the best of the best, and most of them were too stupid to tie their own shoes. This is America’s best and brightest! No wonder we’re so screwed.

Anyway, uh, they actually went to the trouble of giving Baroness thick black glasses behind her permanently-affixed scuba goggles. And upon closer inspection I think she’s actually just Scarlett, painted scarlet, with fins and a rebreather. Like the Native American’s bison-consumption philosophy, Hasbro lets no part of an existing mold go to waste, it seems. 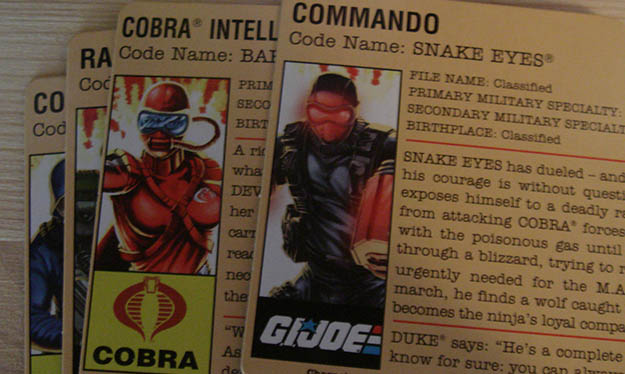 I do like the attention to detail in the file cards, though. They actually went to the trouble of painting new renditions of Chernobyl Snake-Eyes and Undah Da Sea Baroness in the style of the old packaging art, which wasn’t used anywhere on the box but these tiny little 1×2-inch portraits. 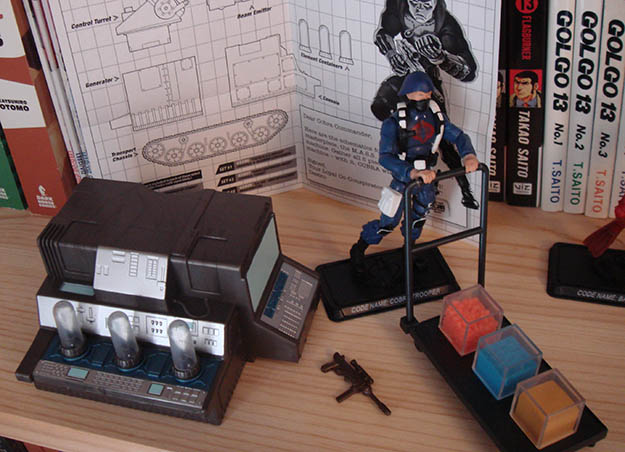 And finally, the cherry on top: A Cobra Trooper pushing a hand-truck loaded up with magical catalytic elements for the M.A.S.S. Device, along with the device in question. And old-school blueprints, too! Complete with a touching letter from Destro to Cobra Commander.

Well, it’s not actually the whole device, but rather a single component thereof. It looks like there’ll be five of these DVD sets, each with a piece of the M.A.S.S. Device that can be assembled to create the whole thing. And just to be extra annoying, there are three little glass tubes that can be removed, and three figures (sold separately, of course) will come with elements that can be placed inside. Insidious!

It’s good news for me that they’re making a G.I. Joe movie, I guess. Once that hits, they’ll stop catering to nostalgia dopes like me and start pumping out toys based on the film, which will be much easier to resist. Who knew that a crappy licensed action flick could be such a blessing?

19 thoughts on “A small indulgence”