A few weeks back, Sega’s Ethan Einhorn showed up for one of our podcasts so he could pimp Super Monkey Ball for iPhone. My suggestion was to try and adapt a few classic Sega titles for the format, namely Phantasy Star or Rez — they both seem pretty touch-screen friendly, right? Well, I take back my suggestion. Someone inexplicably decided to port Vay, of all things, to iPhone, and I decided to give it a try. It turned out to be a very bad idea! (Meaning both trying it and porting it to iPhone in the first place, to be precise.) 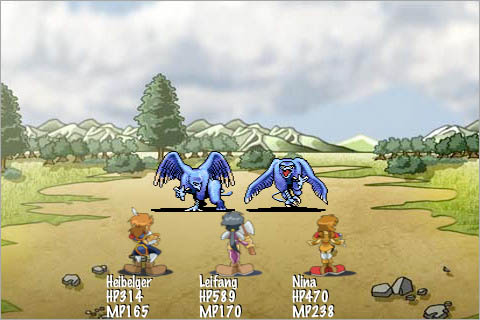 Yeah, wow. What? What happened here!?

I’m guessing this is one of those cases where some tiny little publisher acquired the rights to a dusty, disused and otherwise forgotten property and decided to capitalize on a budding platform in a desperate hope to earn back some of the cash spent on buying said rights. Now, I’ve never played Vay, because it was one of those games that seemed hopelessly, unplayably dated by the time I acquired a Sega CD (approximately 1998), but as far as I can tell this version doesn’t use the Working Designs translation. The character uses his original Japanese name, and the opening “FMV” is narrated by a different actor. This means someone went to the trouble of relocalizing a game that maybe ten people will ever see. Also, as you can see above, they slapped some ill-fitting high-resolution sprites and backgrounds into the battle sequences, but not the rest of the game. And they didn’t redraw the enemies at all. And the original-resolution artwork is stretched and blurred throughout. And, and, and my brain hurts now.

Worst of all is the control scheme, which involves tapping a spot to make the hero move there, or double-tapping to make the hero run straight ahead until he hits a wall. It’s difficult to describe how lousy this system is! The setup isn’t entirely different from many point-and-click PC games, except those generally get it right. Vay for iPhone absolutely does not get it right, and in fact gets it wrong so hard that I fully expect a letter of apology from Apple. Not for the five bucks wasted, but for the five minutes it took me to realize this might actually be the worst adaptation of a 16-bit game I’ve ever played. Oh, for the sweet succor of TOSE!

I like Phantasy Star too much to see this happen to it. I do still think an iPhone rendition of Rez could be pretty boss, though.

Also, I’ve thrown a bunch of stuff up on eBay to accompany my Super NES collection. Don’t feel too bad for me about selling off these things. Sure, it stinks, but anything actually worth owning will find its way back into my possession again, eventually. This is all a temporary measure to get the girlfriend up and on her feet as a professional photographer, a process which involves a great many expenses; but she’s quite talented and someday will be very successful. So, until then, I can live without Earthbound or whatever.