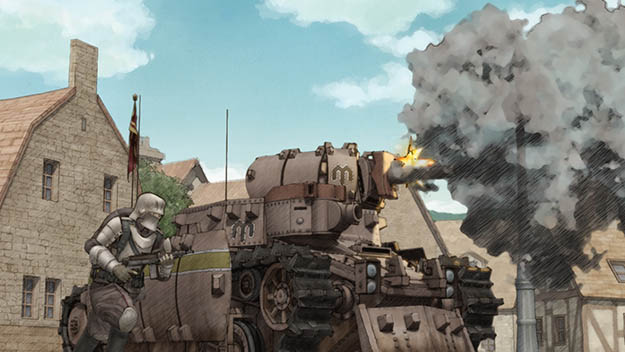 It was written much too hastily between interviews today, and the final product is a bit messy and borderline incoherent in places. But if my Valkyria Chronicles preview inspires even one person to check the game out and support the creation of things that are as innovative as they are beautiful, then my trip to E3 will have been a success. That screenshot you’re seeing above? That’s in-engine. An actual battle screenshot. Not FMV, not a bullshot — that’s what the game really looks like. Except that in action, it’s even more wonderful, complete with sound effects displayed as printed words. Also: Aika! The most lovable character from Skies of Arcadia‘s cast has become a digital actress working in new role. And she’s allergic to pollen, apparently.

In fact, there’s much more to the game than that preview touches on — not only Aika’s pollen allergy and other such minor character details that randomly affect combat, but the way certain warriors work better when grouped together on the battlefield, and the way characters can crouch for cover during combat, and how cover can be destroyed by tanks, and…well, anyway. It’s no longer a foregone conclusion that Fallout 3 will be the best RPG released in October, is what I’m saying. The twenty minutes I played of Valkyria convinced me that it is absolutely spectacular.