Well, I beat as much of Mega Man 9 as one could reasonably claim to have beaten at this point. The E3 demo is limited to just two stages, Plug Man and some other goon — sorry, their names aren’t given, but I’m assuming it’s probably Concrete Man. The former’s stage is pretty clearly Plug Man’s, since the boss they show at the level select has a plug for a hand and a pair of A/C prongs on his shoulders. Also, his stage is full of electricity, and there are giant A/C jacks in the background. You know those big-ass jacks you plug a washing machine or refrigerator into? Yeah, these are way bigger than that. The other dude, though, I dunno. He’s reddish and rounded and lives in the forest. He’s just some guy.

I didn’t even get to face off against either of the bosses! The demo ends as soon as you reach their chambers. However, I can safely say that even making it that far was the toughest time I’ve had with a Mega Man game since a much younger version of myself struggled through the original game twenty years ago.

According to Capcom’s reps, only the company’s internal people have managed to finish both stages. So, I had pride on the line and stuff. I asked if I could have one of their amazing MM9 “box art” T-shirts if I won — it’s truly a thing of glory, with badly-airbrushed Mega Man, a cyborg Dr. Wily and even the classic Capcom first-gen-NES grid background — but alas, only a handful exist and belong to the game’s internal staff. I pressed on regardless. Behold, the fruits of my labor! 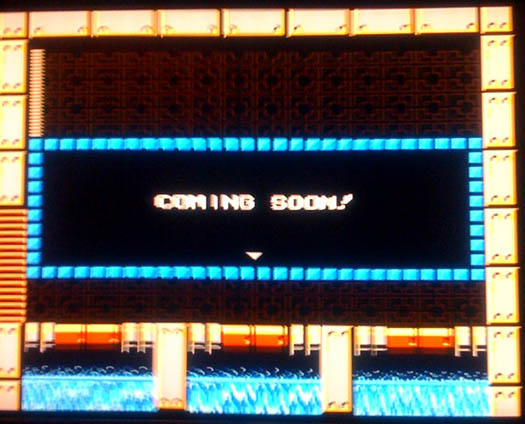 This is where, uh, Concrete Man should live, I guess. This was the easy stage; the only real sticking point is the trio of giant robot elephants which live right before the mid-stage checkpoint. The secret, I learned, is to attack aggressively, Contra-style. Once you’re past them, the rest of the stage is a breeze. 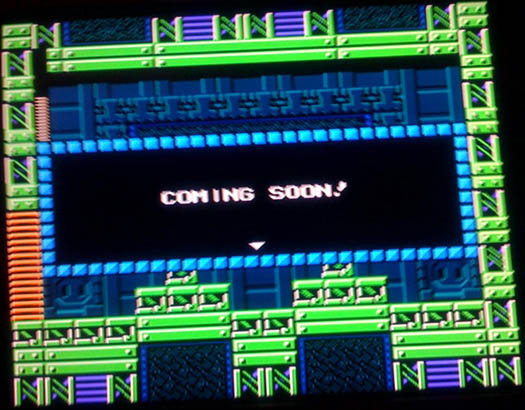 But man, Plug Man’s stage. Holy crap. I said that I was almost looking forward to the disappearing block sections of the game, but… I think maybe I’ve changed my mind. This stage is insane — it makes the block sections of Heat Man’s level in MM2 look like a pleasant stroll. I mean, at least for Heat Man you can grab Item-2 and sail on past. Not here; aside from the fact that you only have the Rush Coil in the demo, the block layouts are really intricate and cramped, so you couldn’t easily fly past. And once you get past the main gauntlet of blocks (which incorporates every disappearing block trick in the book), you still have to content with shadow Mega Man clones that materialize out of the air and rush at you. And tricky platforms with respawning cylinder robots that knock you out of your jump. And one final disappearing block gauntlet which requires perfect timing to avoid bumping your head and falling into a bed of spikes.

The thing is, I never once felt frustrated. Every time I died — and I died a hell of a lot — I knew exactly what I did wrong. I never felt like the game was cheating, or that poor controls had screwed me over, or that crappy level design was boning me. Someone at GAF was sulking about how wah wah Parish reamed Ultimate Ghosts ‘N’ Goblins he’s gonna pan MM9 too, but that’s silly. For one thing, two years is much too long to be sulking about someone calling out a crappy game. Seriously, guys, it’s time to let go and heal your souls. And two, UGnG is, well, a crappy game, one where nearly every death feels arbitrary, unavoidable or completely random. What I’ve played of MM9 is the precisely the opposite: A beautiful example of how to create a viciously hard game that feels challenging rather than cheap. When I cleared Plug Man’s stage, I felt like I’d earned a hard-fought victory; when I beat UGnG, I was just relieved not to have to play a poorly-crafted gauntlet of crap anymore. I mean, the game had its moments, but the aggregate was awful. But I’m all for tough games…when they don’t suck.

P.S. — Watch your podcast feeds tomorrow. If you’re good, Santa might bring you a surprise!