Man, if I’d known Nintendo was waiting for me to express my determination to love Wario Land: Shake — now officially slated for U.S. release as Wario Land: Shake It — I’d have gushed about it sooner. But at least this way I get an official PR-approved screen shot to post. As such: 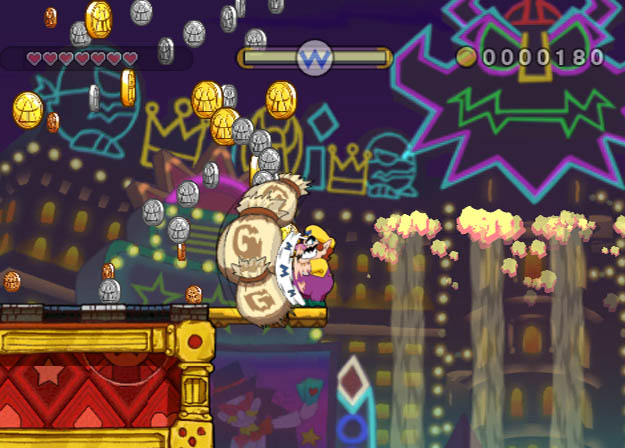 A 2D platformer slated for console release, and not as cheap DLC? It really is a rare wonder in this world. Of course, this also means the pressure’s on: If it sucks, the public refrain will inevitably be, “This should have been a $10 downloadable game!” And we’ll never see another full-budget 2D console release again.

I have to admit a bit of trepidation inspired by this image. Wario is clearly taking the game’s title to heart and shaking things, but in my experience platformers don’t take well to this mechanic. Treasure’s already messed around with it in the form of Mischief Makers and Silhouette Mirage, two decent platformers which would have been much better if you didn’t have to stop every few seconds and fling enemies around until their pockets were empty. Weirdly, Treasure’s not developing Shake It, even though they did create Wario World. There’s probably some sort of symbolic circularity here, but I don’t want to think about it too hard. I’m too tired to be pretentious today. Clearly, old age is taking its toll on me.

12 thoughts on “Speaking of coelacanths….”