You know, when I blogged about my efforts to rescue and clothe a poor, abandoned ninja girl and mentioned Izuna 2 in passing, I didn’t realize the synchronicity I had inadvertently set into motion. But now Atlus has gone and connected the dots for me by saying, “How can we market a challenging roguelike RPG about ninja warriors in ancient Japan? Hmmm. Ah yes! Breasts!” And lo: 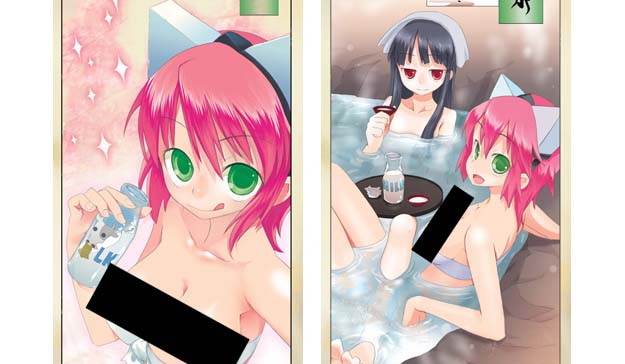 (I added the censor bars myself, though they probably aren’t strictly necessary, as Izuna’s figure is pendulous enough that nothing technically obscene is shown. But sometimes people I know and respect see this site, so! Black bars it is.)

Anyway, the two images above are posters to be potentially included as a preorder bonus with the game, and the publisher is allowing fans to vote on which they prefer. Me, I’m voting for the second one, because I love the hilarious self-editing that tries to pass off what is clearly a sake bottle and saucers as “milk.” From this we may establish a hierarchy of what is acceptable in media: Hollywood has proven that violence is preferable to sex, but it seems overt sexualization trumps underaged drinking. True, the de-sake-fication is present in the one on the left, too, but coupled with the rather grotesque anatomical exaggeration it suggests an entirely different meaning. Plus, I’d only be about 60% embarrassed to display the one on the right, where as the first one would hover right around the 98% humiliation threshold.

This does bring to light the curious conundrum of selling niche games. Clearly Atlus is a company that more or less exists to localize hardcore RPGs and strategy games catering to small crowds of dedicated enthusiasts, but I guess marketing a roguelike is too demanding a task even for a corporate entity fine-tuned for the promotion of the obscure and unfriendly. (Certainly they’re not alone; the pitches I’ve seen this year for the likes of Chocobo and Pokémon-flavored Mystery Dungeon games have bent over backwards to dance around any mention of how the games actually play.) They didn’t even bother to send us a copy of Baroque to review, and now with Izuna 2 they’re playing up the fact that the game’s character designer really likes to draw breasts. The fact that the game consists entirely of simple randomly-generated tiles and chubby miniature sprites dying a lot? Uh, pay no attention to the roguelike behind the curtain.

It’s kind of a shame, because Izuna 2 is actually really good — it plays much better than its predecessor, with some great new Big Picture concepts and lots of welcome minor improvements. It feels more like Shiren the Wanderer than most Chunsoft-developed games, in fact. The irony of it all is that I can easily imagine how this line of marketing, redolent of lolita complexes as it is, could actually drive away the RPG fans who would actually appreciate the game it for its merits. But don’t worry, guys. The game is all about number-crunching and daunting setbacks and tiny graphics that would have looked fairly mundane on Genesis.

So I guess what I’m saying is, don’t let the all this questionably-tasteful nonsense scare you away! Izuna 2 is a good old-fashioned RPG, and liking its gameplay will not in fact make you a pedophile. That is all.

20 thoughts on “The underclothed ninja returns”