A random thing from long ago

I’ve been meaning to scan these things I dug up a while ago.

Back when I was in, oh, eighth grade or so (ohgodthatwastwentyyearsagodon’tthinkaboutit), I had a mad idea to create a bunch of collector’s cards, creatively entitled “Mutants.” This was in 1988 or ’89, so one might think this was somehow inspired by Teenage Mutant Ninja Turtles — and indeed, a few ninja turtles did make their way into the collection — but in fact, that’s not the case. Rather, they were inspired by my favorite game at that particular moment, Blaster Master, whose underground corridors were teeming with mutants. Why not make my own, I figured? And so I did. 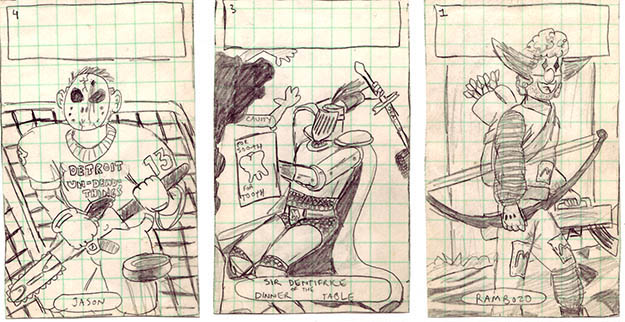 Yes, even at this young age, my love of irritating puns and dishwater-flat jokes was in clear evidence. From left: Jason (goalie for the Detroid Un-dead-things), Sir Dentifrice of the Dinner Table (battling what appears to be a Cavity Creep with a toothbrush and a shield emblazoned with his motto, “For Sooth For Tooth”), and Rambozo. Who for some reason looks rather more like Ronald McDonald, but give young me a break. He was only 13.

if you’ve ever wondered where the downward spiral of my existence began, it may well have been here! Anyway, I have about 50 of these. I’ll probably scan them in from time to time. You know, when I feel the need to embarrass myself.

Meanwhile, the latest episode of Retronauts is live. I would say it’s very exciting, but you’ve heard my voice; I’m as sleepy and not-particularly-sonorous as ever. Also, there’s ninja erotica (fortunately of the non-turtle variety) over on my 1UP blog. I get paid for this stuff, guys.

33 thoughts on “A random thing from long ago”