In horror, I say 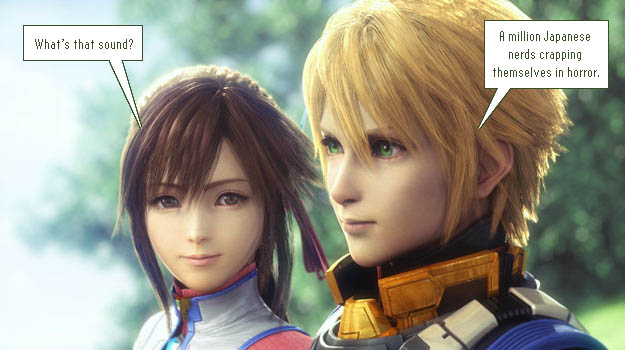 I was sort of hoping that the big Microsoft RPG conference that happened last night in Japan would include a tearful confession from Square Enix that the only way they can make Final Fantasy XIII even close to being profitable is to exploit “Crystal Tools” and publish the game simultaneously on PS3 and XBox 360. No such luck! So we’re robbed of the spectacle of the Internet’s low rumble of needless, bipartisan system advocacy flaring violently into a full-on conflagration, and other such mixed metaphors.

However, the resulting news still included a nugget that’s almost as good: Star Ocean 4, subtitled The Last Hope, will debut on Xbox 360 — perhaps exclusively? I wonder if this means the Xbox-averse Japanese gamers who love all things Star Ocean will find themselves compelled to chomp hard on that bullet and buy a system, or if they’ll write off the series as dead for betraying them. Probably the latter. Nerds do tend to take corporate business decisions rather personally.

“Last Hope” was, of course, the subtitle of Torneko’s second Mystery Dungeon adventure. I’m hoping this means SO4 will be eschewing the tired, played-out, bog-standard Tri-Ace battle system in favor of a roguelike style. That would be brilliant… by which I mean it would further infuriate an already enraged fanbase. You go, Enix.