Having played a few more hours of Grand Theft Auto IV, I’m starting to warm up to it a little more. Why the change of heart? Well, let’s just say Rockstar can be rather… persuasive: 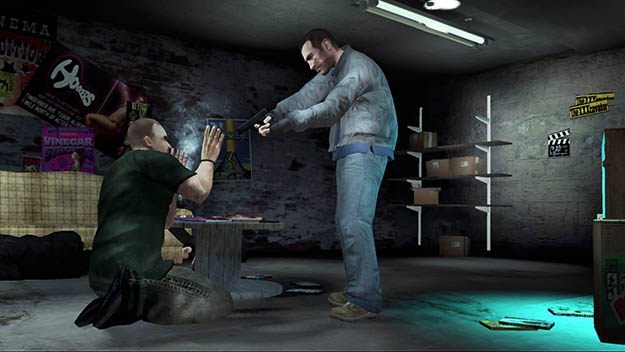 Nah, actually it’s because I’ve moved into the meat of the game and the cutscenes have become less pointless. Also, it seems that once you max out your relationship with NPCs they stop harassing you on the phone quite so often. And, finally, I’ve begun stealing a better class of vehicle, which makes driving considerably more entertaining. The low-end cars are less fun than ever to drive, but I find myself doing preposterously awesome things in some of the sports coupes. So that’s nice.

Weirdly, though, I’ve found my favorite thing to do in the game is take cab rides. There’s something incredibly relaxing about sitting in the back seat of a cab as you ride through traffic, obeying all traffic laws and listening to the cabbie complain. Watching as the city moves by from a street-level view, the scenery framed by a cab door, is probably the single closest thing I’ve ever experienced to real-life verisimilitude in a game. This version of Liberty City is much brighter and less oppressive than its previous incarnations — it’s more like a place where people live than a bleak mechanical shell. Squint as you’re cabbing it home and at the right time of day it almost looks real. (As long as you ignore the people.)

I’m sure once I’ve played more the gimmicks and repetition will become more obvious, but I’m enjoying the random little details: The ability to give money to bums, the way people carry around coffee cups in the morning, photographers snapping pictures of interesting scenery, etc.

Of course, the actual missions waver between lame and annoying, but ain’t that the way it always is? Anyway, it’s starting to feel a bit more like what I expect to see from a GTA. Now if only the camera weren’t so swimmy, I could play for more than 90 minutes without getting a headache….