So, I lied about Final Fantasy Tactics Advance. I played another hour into the game before remembering why I had quit before at around the same point: The infuriating probability stats which are unquestionably rigged to the computer’s benefit. I kicked off a story battle with three attacks, all rated at a 70% success rate, all three of which missed…followed by three enemy attacks, all rated at 50% success or below, all three of which hit. I don’t really need that kind of stupidity in my life, so it’s on to working on something I need cleared off my plate before I can feel like a relevant participant in this meaningless field of journalism once again: 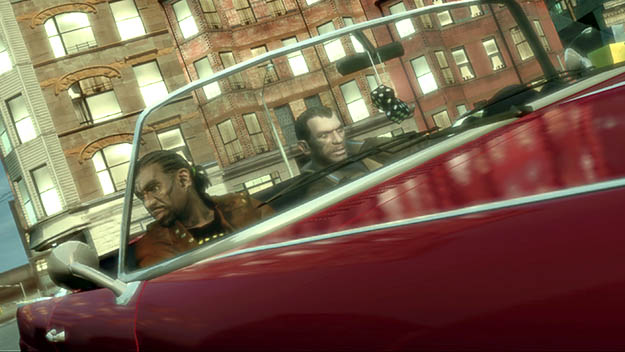 I’m finding myself struggling to like Grand Theft Auto IV. It feels as though Rockstar decided to take away all the things I enjoyed about the PS2 titles while amplifying everything I detested, apparently in the name of “realism.” The free-form taxi/ambulance/pizza delivery missions I always used as a tool for orientating myself within each new city? Gone! (Well, not completely gone: Just hidden away behind a few compulsory stories missions and an unreliable dispatcher who turns me down two times out of three.) The effortless, arcade-like auto controls? Destroyed by an ill-fitting physics engine. The freedom to just play and enjoy exploring? Thwarted by chatty, needy NPCs who constantly call and penalize you if you don’t drop everything you’re doing to go play pool with them. In other words… they’ve played down everything that makes GTA GTA in my book while emphasizing all the crap that makes me not want to play other games of this ilk. Don’t even get me started on how long I’ll have to play to get out of the boring Brooklyn/Queens areas and into the juicy Manhattan sections. Well done, Rockstar.

Still, I don’t dislike everything about the game. The graphics look nice so long as you close your eyes every time a character is shown in close-up. And there’s a fusion radio station! Granted, I could enjoy the same net effect by looking at GTA4 screenshots while listening to Brand X, but I sank money into this and I’m determined to siphon some value out of it.