BIG BOSS HERE. I FORGET TO TELL YOU SOMETHING!

LAST WEEK I STOP AT J&L TRADING. DUSTIEST GAME SHOP IN AMERICA! OVER. I remember the first time I visited J&L Trading in New York’s Chinatown. Those of you who have been reading this site for too damn long may recall my failed attempt to establish myself in NYC, seven freakin’ years ago. Back then, I was absolutely staggered to see so many games of foreign extraction in a single place. Never mind the ludicrous prices and the pirated Game Boy Color games pretending to be cartridges for the brand-spanking-new Game Boy Advance; the closest we came to an import shop in Abilene, TX was a gloomy computer repair shop where the surly middle-aged owners had set up a couple of shelves for a smattering of expensive Super Famicom and Saturn games, and quite a few more shelves for dreary-looking porn software. But J&L, wow, hundreds of import games. And barely any smut to be seen. Amazing stuff!

Seven years later, the place might actually be more depressing than that Abilene shop. At least the one in Abilene moves around occasionally, and even gives a sense of shifting inventory. J&L barely seems to have changed in all this time. Yeah, current-gen games line the shelves at the front of the store, but they appear to have the exact same Japanese PlayStation and Saturn games collecting dust as were there when I first found the place. 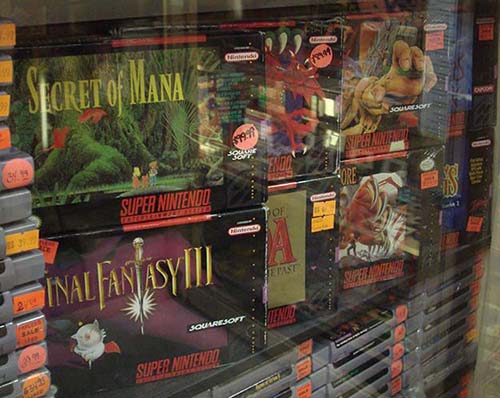 Still, it’s a damn sight better than New York’s other big import shop, Video Games New York. Last time I was in the city, it was located on St. Marks, but I guess it was chased away by rising real estate costs or gentrification or something. Now it’s around the corner, but its new location has a sort of lived-in appearance already — “lived-in” meaning “apocalyptically trashy” in this case. It has a sort of filthy weariness about it that most shops only acquire after a decade or more of neglect and abandonment. You’d think they could afford a maid, with the prices they’re charging — the image above is the highlight of their “rare games” collection, a handful of shabby, dilapidated Super NES games for which they want $100 or more because they happen to come with worn, abused boxes. (No word of manuals or other pack-ins.)

Really, America? Is this the best we can do for used and import games? I know LA has a couple of decent shops, and Pink Godzilla in Seattle has a good reputation, but even the most run-down and poorly-maintained used game shop in a small Japanese city of your choosing puts them all to shame. I dunno, should we just blame it on GameStop and be done with it? Depressing.

On that cheerful note, I guess I’m done with images from last week’s New York trip. I’ve finally remembered my Yahoo password, so I was able to update my Flickr images to add some titles that are more descriptive than “DSC000412” or whatever. I still need to give names to about five pages worth of Tokyo images, but I’m pretty sure the world isn’t going to come crashing to a halt if I don’t do that right this instant.