Once upon a time, there was a glorious mecca of video game nerd happiness called E3. Every May, E3 rose from the pumpkin patch to bring children of the world news and previews of hotly-anticipated fall titles at the expense of the health and well-being of a few thousand idiots occasionally mistaken for journalists. Sadly, E3 died last year for your sins, and a foul impostor has sprung up in its absence. You can tell it’s fake, though, because it lives in July. Also, it’s lame.

But old habits die hard, and game publisher have trouble accepting this filthy fake as legitimate. And so they retain their old patterns of behavior, perhaps in the hopes that the true E3 will rise again and lead us to the promised land of huge mid-May web traffic spikes. Which means all those old pre-E3 events that used to clog April like a blob of matted hair are still stuffed in the proverbial drain of our productivity. To wit: The fruits of labor from last week’s Nintendo formerly-a-pre-E3 event follow.

Final Fantasy: Crystal Chronicles: My Life As a King
I’m half-inclined to pretend this game doesn’t exist. Something about seeing that many subtitles in conjunction is deeply offensive. On the other hand, I kind of respect My Life As a King in a Progress Quest kind of way: It strips away the pretenses of RPGs and reduces the entire thing to the bare-bones spreadsheet that serves as the framework for every entry in the genre. 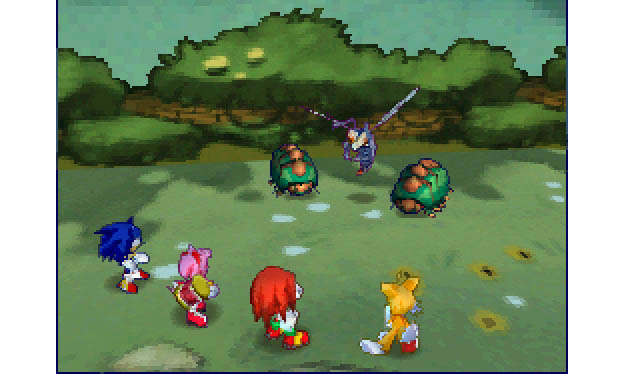 Sonic Chronicles
I can’t believe I have placed an image of a Sonic game on the front page of this site. Without irony! But then, I can still hardly believe BioWare is making a Sonic game. Well, actually, no — now that I’ve played it I totally can. It’s pure BioWare, which is to say ambitious, talkative, and sort of rough around the edges with a horribly ugly user interface. It’s sort of reassuring, honestly.

Space Invaders Extreme
I hate the name, but man this game is fantastic. So good to see that Taito has actually figured out how to make this musty old classic feel interesting again.

Pokémon Mystery Dungeon Redux
My favorite part of the presentation for this game was the way Nintendo is bending over backward to downplay the “Mystery Dungeon” part of the game. Rather than talk about all the things that make the series interesting, their spiel revolves entirely around the fact that now you are a pokémon! Honestly, people just don’t appreciate the beauty of masochism.

12 thoughts on “Things we said today”