This is awesome. Awesome in a stupid, frivolous way, sure. But awesome nevertheless. 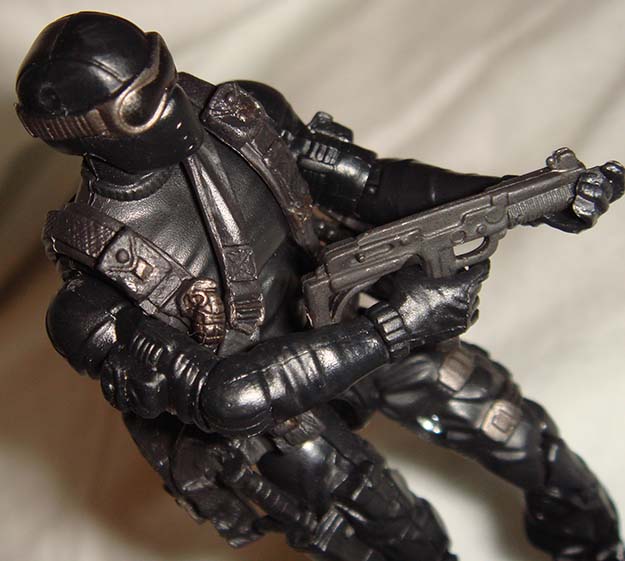 It’s no secret that I am hopelessly addicted to nostalgia. It’s pretty much what I’ve built my current career on: I wrote about games I played as a kid, and that led to me getting work at 1UP where I took charge of the classic gaming section, which in turn led to me being transplanted from art to editorial, where I promptly set up shop writing (and talking) about old games full-time. I suppose it’s just another sign that I’m aging gracelessly, since I’m also a hopeless sucker for other things that tie back into my youth.

I bought some of Hasbro’s 25th Anniversary G.I. Joe toys a while back, of course. Tonight I finally got around to opening one of them — specifically, the original, commando-style Snake-Eyes. (Not to be confused with Snake-Eyes going commando, because yuck.) It seemed appropriate, since the original Snake-Eyes was the first figure I bought from the classic line. (In retrospect, I was sort of lucky, since that was pretty much the only time I ever saw any version of the character at a store until many years later when the entire line had gone down the tubes and he was wearing neon purple and blue.) I always kind of liked the original version better than the wolf-wrangling, ninjutsu-using, Venetian-blind-wearing revision that everyone else seems to crazy about. There’s a sort of elegant simplicity in the original figure; the story goes that Hasbro was running over-budget on the initial line-up of toys and decided to produce one character who didn’t have any paint detailing. So they mashed together body parts from other characters and cast them in solid black, then shocked the world by going and making such an evil-looking guy a hero. Because, you know, Darth Vader or whatever.

Anyway, I hadn’t really given the anniversary figures a close look, but now that I have I’m impressed, and a little embarrassed. Embarrassed because these guys feel really fragile, not like the solid chunks of death plastic they were when I was young. Although I guess it’s just trading one form of fragility for another; the old ones were made of a more brittle form of plastic, and nothing was sadder than a hero with a broken thumb. Except, of course, a hero with a broken crotch. My extremity-deficient Joes usually ended up being disassembled and reformed into bizarre amalgams, such as the infamous terror of my playset, a horrifying hybrid of Major Bludd, Sgt. Slaughter and Wild Weasel who sported Zartan’s instantly-tanning forearms for extra fun in the sun.

No, these are fragile in a different way: they’re meticulously detailed and loaded down with all kinds of gear. It’s sort of clever, actually, since apparently a bunch of characters share a common super-minimal body but all manage to look unique thanks to the accessories layered over top. For instance, his web gear is now an accessory rather than molded to his body, and even includes a working holster for his pistol and a working sheathe for his knife. (Disappointingly, not a spike-knuckle trench knife. But a boy can dream.) The rather fussy paint jobs help, too. The old Snake-Eyes was unadorned black plastic, but this new one has lots of subtle, near-black detail that looks fantastic.

But that’s why I’m embarrassed: Because clearly, this is no toy for little kids. All those little bits and pieces, the thin webs of plastic, the intricate but extremely delicate jointing — they all scream, “This is made for manchildren!” And, yeah, they are. They take careful aim and hit me where it hurts — right in the childhood — while also managing to make the real fragments of my childhood feel stupid and obsolete. Side-by-side, they make the old ones look ridiculously simple and plain, as you can see. 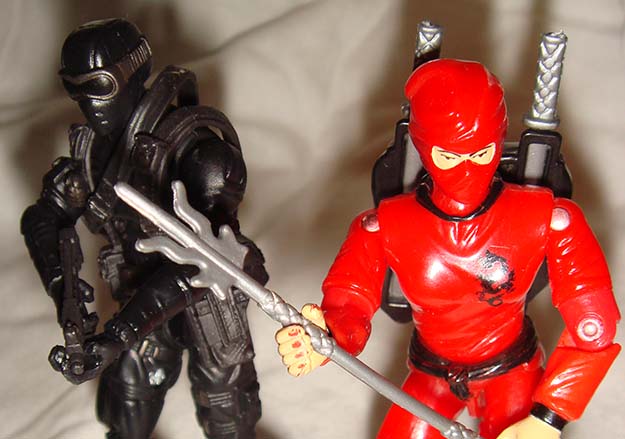 Of course, Jinx is still a brilliant character, lumpy awkward figure notwithstanding. You have to respect a she-ninja who meticulously does her nails before going into combat. Jinx knows what’s up. Just because you’re getting paid by the government to kick dudes in the breadbasket while wearing a loose, shapeless robe doesn’t mean you can’t feel sexy.

7 thoughts on “A real nostalgic hero”