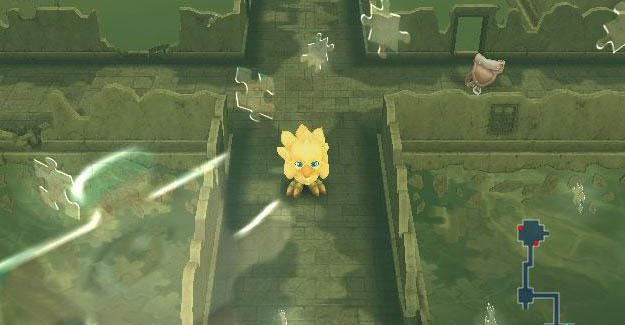 So apparently 2008 is destined to be the year of the roguelike; just as the shine is starting to fade around the edges of Shiren the Wanderer (buy it if you haven’t already, kids — it’s supoib, as they say in Stoogeland) and the tykes gear up for Pokémon Mystery Dungeon 2, the most recent entry in Chunsoft’s ongoing mission to make everything all hardcore and turn-based is announced for U.S. release: namely, Chocobo’s Mysterious Dungeon 3. (Or “Chocobo’s Mysterious Dung,” as the front page of 1UP once called it quite by mistake.) I suspect this Chocobo outing will receive more informed and forgiving reviews than its predecessor enjoyed nearly a decade ago.

I’m happy to see the game get a chance in the U.S. — it apparently tanked in Japan — but I’d much rather hear news of Shiren 3 or, dare we dream, Dragon Quest IV for DS. Even so, I won’t complain; especially as this is the first game in ages to forego the usual Square Enix Tax that I’ve been lamenting since playing Dragon Quest Swords and realizing that it was better suited to the $20 price range than $50. Maybe the company is finally realizing that pricing niche games as if they were blockbusters isn’t doing any favors to under-the-radar titles like The World Ends With You! Or, more likely, this was supposed to be a $30 game and they applied the Square Enix Tax to make it $40.

Price quibbles aside, it is always a pleasure to see roguelikes make their way over here. Now Atlus just needs to pick up Izuna Ni. And maybe someone can grab Dramatic Dungeon: Sakura Taisen and Dungeon of Windaria. (Or not, given how banal they look.) In the meantime, I’m trying to compile a list of console- and handheld-based roguelikes. Please let me know if I’ve missed any! And don’t bother telling me about PC-based entries; that is an epic undertaking that could easily be someone’s full-time job.

30 thoughts on “A roguish chocobo”