So hey what’s this?

Oh, just a new episode of Retronauts. That’s all; nothing to be alarmed about. But then what’s this? 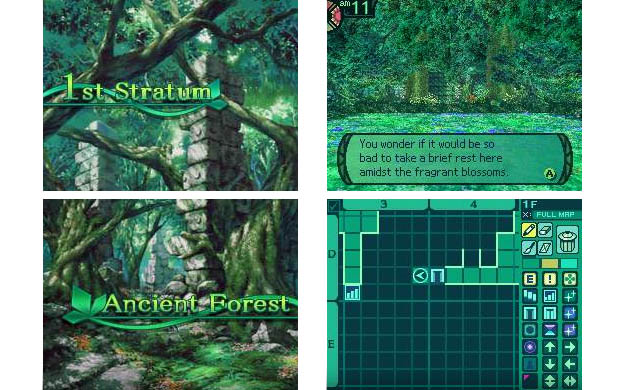 Oh, I see. It’s Etrian Odyssey II. Like, in English and all.

Oh, hey! Etrian Odyssey II! In English! That’s fantastic. June 17 is looking like a very, very busy week, with Metal Gear Solid 4 in need of completion and Final Fantasy Tactics A2 crowding the hardcore portable RPG space. I think I will make time for EO2, though. I might even have finished the first by then — although, sadly, that didn’t happen while I was on vacation as I had planned since I spent my free time posting images here of Japan instead.

Currently, I’m nearly finished with the 13th floor after having become bogged down with the ant nest on 12F. Like most major FOEs in the game, the Royalant was a brutal fight that I won in part through sheer luck that I probably couldn’t repeat reliably on a second try. That might actually be what I enjoy the most about EO: The constant sense that I’m surviving through sheer audacity and determination, the knowledge that brute leveling doesn’t go nearly as far in this game as smart skill selection and application. I’ve been flipping between EO and Shiren this past month, and the two games (though considerably different in many ways) succeed largely because they share this key element in common.

I feel quite a bit more attachment to the mute, personality-free characters of my Etrian guild (El Spite) and to Shiren than I do to most game characters who are considerably better-defined. Ultimately, they both tap into the essence of role-playing’s original vision, allowing me to define them through their abilities and their actions and how they react to circumstance. This is, I have to say, considerably more satisfying than letting some wannabe film auteur define them for me with drawn out dialogue and story sequences. The biggest forum-rat complaint about the last episode of Retronauts was our observation that the Materia system turns the characters into generic, replaceable carbon copies with no innate definition besides their character models, as apparently it doesn’t bother some gamers. That’s fine for you guys, I guess; more power to ya. But honestly, the core concept of determining the growth and improvement of characters is essentially the last thing a game like FFVII has to draw upon for its claim of being a role-playing game; take that away in favor of hot-swappable powers and much of the appeal of the genre evaporates from the experience. Ultimately, you’re stuck with a crew of fighters whose salient traits are wholly defined by the developer (and in that particular case defined very poorly); more critically, you lose any sense of risk and reward in your choices. Why specialize and strategize when you can effortlessly wade through each situation with a quick visit to the Materia screen?

Anyway, this is a stupid aimless ramble and I don’t remember what the original point was. So, in conclusion, I can’t odyssey in Etria for the next week since I have to review Rondo of Swords and Dodge Ball Brawlers instead. I’m seriously never gonna finish that game.