Not alone in Kyoto

So, I’m in Kyoto. I’ve barely seen it, since we came straight to the hotel, but at a glance it’s a much more, um, real city than Tokyo. I always get the impression that everything in Tokyo was built about a week ago and constructed entirely of plastic, but here (discounting the old city quarter, of course) the construction seems to date back to the post-war reconstruction era of the ’60s — everything is very stolid, very granite-and-concrete, very lived-in. Basically, it’s not all that different from an American city like Detroit or Chicago, except that the crime rate is no doubt a teensy fraction of what you get in either of those places.

Anyway, I was going to update the weekly releases last night, but when we arrived at the ryoukan they fed us this: 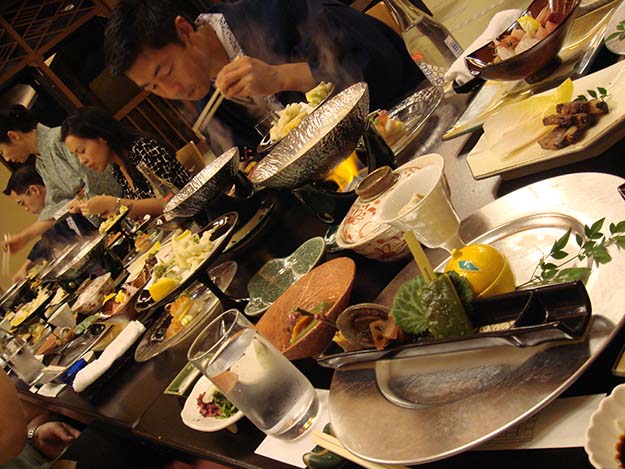 And the bottle of sake I drank put me right to sleep the second I returned to my room. I am what is known in some parts as a “lightweight.”

So now I’m sitting in the lobby of this very traditional Japanese hotel, looking out over a peaceful rock garden with a waterfall that feeds into the public bath — that I won’t be using, because it would go counter to my tradition of hiding every possible inch of my body from public sight, and the last time I wore shorts was in the ’90s, and I don’t remember how long it’s been since I wore short sleeves without a long-sleeved shirt beneath it, so you can forget about me sitting naked in front of a bunch of strangers — using the very traditional wireless Internet connection as the PA plays very traditional Japanese music box renditions of Disney music. I can show you the world, take you wonder by wondeeeeerrrr….

I’m alarmed by the frequency with which I’ve heard these ear-shredding chime-y tunes since arriving here. They seem to be what they use in place of elevator music here; first there was a tonkatsu restaurant that inflicted Aerosmith, Whitney Houston and Elton John tunes on us, then I kept hearing it throughout our Shimbashi station base of operations in Tokyo, and now there’s this. If Japan is trying to prevent me from ever returning, this is probably the surest tactic for it.

Now they’ve switched the “The Entertainer.” Aaaand I’m off to go crush my skull beneath the massive stone tanuki statue in the courtyard.

17 thoughts on “Not alone in Kyoto”