I loved Kenner’s Star Wars toys when I was a kid — or at least until I discovered G.I. Joe, which was much more articulated and therefore much more interesting — and I confess to maintaining a highly specialized collection of their modern-day counterparts. For the most part, though, Star Wars toys are kinda like modern comic books, an unpleasant sort of pablum for feeding adults who aren’t quite able to grow up. (I’m typing this as I sit about five feet from the shelf where my astromechs are displayed, so yes, that unfortunately includes me.)

They’re definitely not for kids, and if you need proof look no further than the fact that Hasbro released a “Death Star conference room” collection last year; it consisted of half a dozen paunchy middle-aged white men in dress uniforms, which is, you know, not really the stuff of which childhood playtime is made. And since the line now sells exclusively to grown men with disposable income and a need to own everything, the manufacturer is freed from worrying about whether or not specific figures will sell — they basically have a built-in guarantee that anything they make will be snapped up by completists. This makes for an absolutely fascinating spectacle; I like to check on the line from time to time to see if in fact Hasbro really will turn any character with more than three seconds of screen time into a tiny plastic toy.

I’ve long had a benchmark set of figures I absolutely never expected to see, and systematically each and every of them has been turned into a child’s toy. Luke floating in a diaper? Check. Uncle Owen and Aunt Beru? Yup. The cantina bartender? Shockingly, yes. But I’ve always assumed I had one last “no way” hole card, the one character who is both so minor and so visually unappealing that they’d never actually turn it into a figure: the fat six-breasted dancer from Jabba’s Palace. 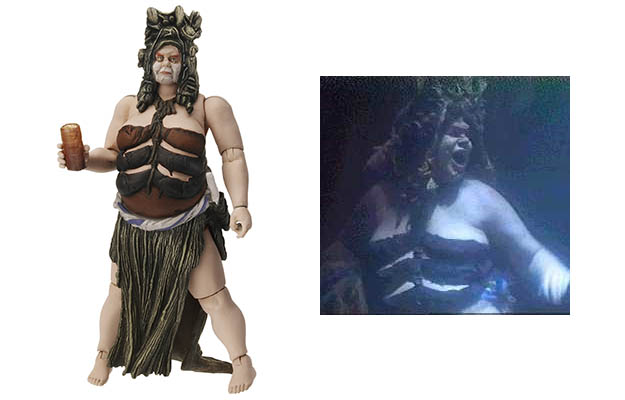 Meet “Yarna,” the final proof that Hasbro absolutely will plumb any depth, and thousands of nerds will plummet right to the bottom with them. The really awful part is that she’s one of thirty figures who will come with components to create half a dozen unique new astromechs. But I’m drawing the line here, you bastards. You’re not taking me down with you.

11 thoughts on “A question, answered”