Flushing the Backlog: another one down

My Pile of Shame has been reduced by one today, sort of. I cleared Tomb Raider Anniversary off the stack… though unfortunately not because I finished it. I made it about halfway through the game, having just cleared the fire room in Greece that was my bête noir back in the day, when the game decided to corrupt my save files and dump all my progress. Awesome! I don’t know if this is a sign of an incipient Red Ring of Death or simply crappy programming by whomever Crystal Dynamics tapped to port the game to Xbox 360 — given the legendary shoddiness of Microsoft’s system and the chugging framerate and mushy controls in this version of Anniversary, my guess is “equal measures columns A and B.”

Rather than shout at the heavens and tempt them to strike me down, I’ve decided to move along a new venture for the time being. That venture being Assassin’s Creed, the single most controversial game of 2007, apparently. Is it truly a game so crappy that it deserves to have the word “ass” in its title twice? Or do I work with a bunch of addlepated morons who can’t appreciate unbridled genius, meaning Ubi’s PR team was totally right to take their toys and go home after we dared give the game less than a perfect score? Seeing for myself, I think, will present an interesting experience. I go forth with eyes unclouded by hate, etc. etc.

Of course, I’m bracing myself for the arrival of the dreaded RROD. Anyone know if there’s a way to siphon all your 360 save files to some sort of backup medium? I’d like to keep my 40-hour everything-totally-done Mass Effect Paragon clear data for use in the sequel, if at all possible. Maybe I should hold off on Creed until I get this sorted out. 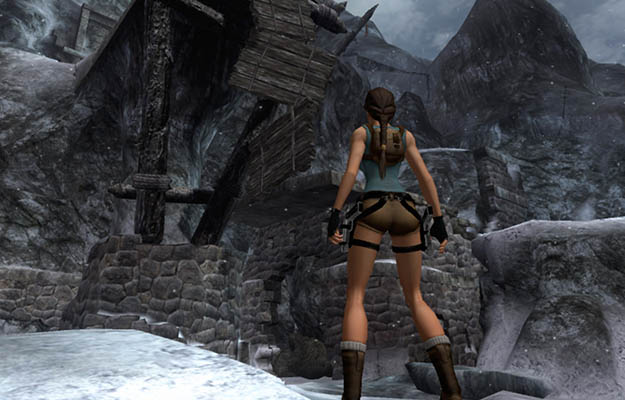 In a way I’m slightly relieved that I had to put ‘er down like Ol’ Yeller, because my feelings about this game teeter wildly between love and hate. What really kept me going was revisiting all of the fantastic environments of the original game, presented in a fairly gorgeous fashion. Anniversary made the world seem a lot less claustrophobic by brightening things up and opening up the ceilings to clear sky from time to time, but at the same time was very faithful to the original game. And it’s surprising just how well I remember Tomb Raider’s environments nearly 11 years after since I last touched the game — maybe because it was the first 3D world I was given to explore in its entirety. (Yeah, I played Mario 64 first, but I always felt like Tomb Raider had more immersive and thoughtful level design. Blasphemy?)

Sadly, as much as I appreciate the modern recreation of a severely dated classic, as much as I respect the developers trying to make the original levels work with Legend‘s control scheme and environmental gimmicks… it doesn’t always work. I’ve found myself dying far often in Anniversary than I did in the original version of the game. Primitive as it was, the early Tomb Raiders were built on a grid, and that worked in the player’s favor for tricky jumps — you didn’t have to worry about veering off course or missing your mark. Everything was mechanically precise. Maybe not the most realistic approach, but effective for a video game. By giving you analog control in a world original designed to be digital, Anniversary introduces a potential for imperfection that didn’t exist in the original game — nor in Legend, for that matter, since Legend was designed from the ground up to work with a contemporary control scheme. This has the net effect of making Anniversary feel at once more fluid than the game it’s based on, yet clumsier at the same time.

Still, it’s all worth it to be able to see those brilliant levels one last time. The wide-open colosseum, the Indiana Jones-style Tomb of Qualopec, and most of all the dizzying, daunting St. Francis’ Folly. And I suppose I’ll go back and take another shot at the game, someday… I totally missed out on Egypt, and that is simply not acceptable.

14 thoughts on “Flushing the Backlog: another one down”