I accomplish very little these days with my life, so I am willing to settle for any victory, however small. This weekend, I cleared two games off my looming tower of shame. Not exactly a triumph of the human spirit, but at least it’s something. 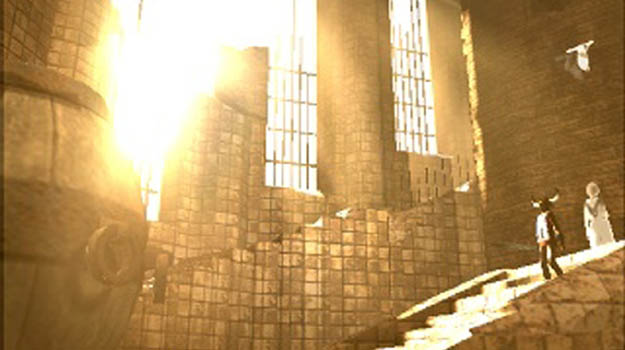 I finally finished Ico. Only, uh, five years late? Fantastic. It was something of a mistake to wait so long to play it, though — not that I meant to put it off for so long, mind you, but every previous attempt I’ve made to complete the game had been tragically derailed by diverse complications, from moving across the country to sheer ennui. Not this time, though. Nope, I clawed my way through to the end. And… it was okay.

No, that’s a lie. It was quite a bit better than okay. But Ico today is a game that’s more easily appreciated for what it represents than for what it actually is; it was hugely influential and has done more to define a genre than anything since, I dunno, Grand Theft Auto. The slightly abstract visuals, the HUD-free interface, and of course the leaping and crawling and climbing through massive, solemn environments… I can’t really think of too many action-adventure type games that haven’t been touched by Ico. Alas, they’ve also improved considerably on its gameplay, smoothing over and refining it and generally taking a bunch of raw, inspired ideas and working them into forms that work just a little bit better all around. The only thing I haven’t seen done better is the wordless, co-dependent connection shared by Ico and Yorda — the emotional heart of the game that propels the game even as it occasionally frustrates. The final sequence was absolutely fantastic, and the happy buzz you take away probably has a lot to do with why people love Ico so dearly.

I also think it’s a mistake to use Ico as the poster child for “games as art,” but that is a debate I don’t want to ever have to bear witness to. Just thinking about it makes my brain shrivel a bit in disgust. 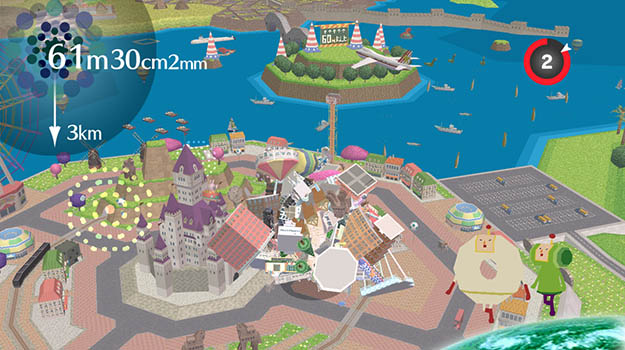 I also cleared the latest iteration of Katamari Damacy off my stack, but unlike Ico I didn’t actually finish the whole thing. That’s partly because Namco Bandai wants me to cough up twelve bucks to access bits of game that already exist on the disc they sold me, but mostly because Beautiful Katamari is pretty crappy. Apparently the more a Katamari game costs, the worse it plays.

It’s a little heartbreaking to think that a game that was the freshest thing going just a few years ago is now stultifying dull. And for some reason the control is really crappy on 360. And the side missions stink. Why, the 10,000º stage has been determined by science to be constructed of anti-fun (a kind of elementary particle that destroys all fun with which it comes into contact). Speaking as one of those annoying, loudmouthed import-loving types who gushed about the original game back when its release in America seemed like the most preposterous notion ever, the series’ progressive crappening is just one more reason to hate video games forever.