I’m back in California but my body’s still on Eastern time, and I’ve found myself awake at 6 a.m. for the past two days and glued to BioShock for practically every waking moment, at least until I came to work this morning. I woulda finished it last night, actually, but I stepped out for sushi and the waitress decided it would be a friendly New Year’s treat to offer me a second box of sake, gratis. Which is very generous, but as a lightweight drinker I quickly found myself needing to use intense concentration when simply manipulating my chopsticks, and once I made my way home I figured that this was probably not the ideal condition in which to take down the final boss.

And now, as Kasey says, on with the countdown. Ah, if only I could get someone to sing “Number six” for me here. 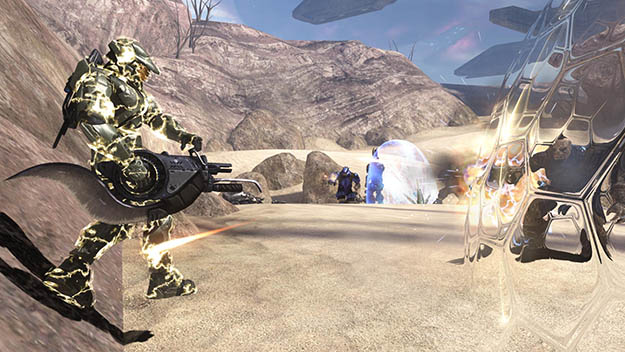 The music analogy I made for Odin Sphere worked pretty well, so let us continue using this theme until it is irredeemably tired and annoying. If Halo 3 were a band, it would be a supergroup whose name and reputation have taken on a life of their own — a group like U2 or the Rolling Stones, whose fame and ubiquity sometimes obscure their music. A band that feels a little predictable and mundane now, but with good reason: they set a standard that everyone else imitates.

Not unlike what the kids were discussing the other day, at this point people seem less likely to opine on Halo 3 itself than on others’ opinions of the game, and on the series’ omnipresence, and on the enormity of its popularity, and on the desperate extravagance of Microsoft’s marketing of the game, and on the media’s apparent eagerness to cover every minor nuance of the game. Et cetera. The merits and failings of the game itself tend to be overshadowed by the meta-discussion, or else are so utterly blown out of proportion as to turn most conversations about the game into dogmatic chest-thumping. Anything you say about it is going to piss off someone. My EGM review — a 9.0, essentially a five-star rating with some reservations — annoyed the fans (because I was clearly lowballing it from some sort of bias) and the haters (because I was too blinded by moneyhats to give it the 6.0 it so richly deserved) alike. It’s one of those games. Maybe the definitive example.

Strip all of that away, though, and what you have is a very good, very polished, very accessible first-person shooter, with some definite flaws. Whether you adore Halo or despise it, the simple fact is that the series represents a landmark in shooter design. These days it’s rare to find an FPS that doesn’t limit you to two weapons (gather as you go), or that doesn’t feature Halo’s set of online play options (refined over the years from their Marathon debut), or that doesn’t give you auto-regenerating shields, or that doesn’t include a persistent voice in your ear to serve as combination storyteller/guide. The Halo design has become a formula for the genre, for better or for worse. Personally, I think it works fine here — Halo 3 is more or less exactly what I expected to see in the trilogy’s finale — but I could live without some of the more blatant (and less polished) knock-offs. Just as no one has ever quite done Bionic Commando‘s grappling mechanic as well as Bionic Commando, Halo-alikes tend not to be as enjoyable as the original. 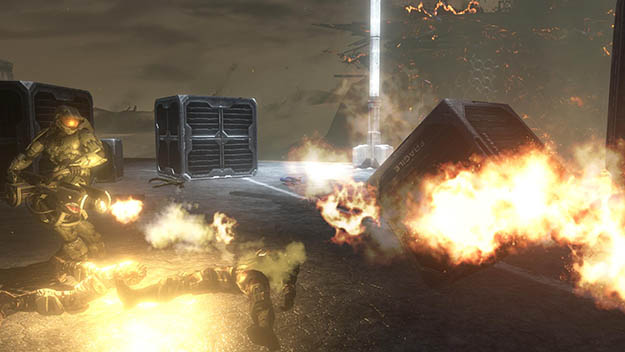 Whether or not Halo 3 deserves to be treated as the most apocalyptically huge game in the history of the human species is debatable, though I’m not even going to get involved in that conversation. I’ve personally written way too much about the game, but for a reason: it’s what people want to read. Regardless of what you may think of the game, plenty of others (millions, I’d wager) think it’s the bee’s knees and even now will eagerly click on any link that says “Halo.” It’s quite the phenomenon, though hardly unique. Halo 3 just happens to occupy the same niche as Super Mario Bros. or Street Fighter II did in years gone by: it’s a crowd-pleaser, a game that hits the sweet spot between polish, playability and accessibility.

I sometimes get the impression that Bungie isn’t quite sure how to handle this mass-market Middle America fanbase it’s managed to tap; their games up to (and, I guess, mostly including) Oni were generally pretty cerebral, and Halo 3 bobs turbulently at the confluence of two very different streams of conscious. Its greatest failing, I think, is that it compromises itself trying to appeal to both and doesn’t really work perfectly for either. The story, for instance, is a pretty decent sci-fi tale that longs to be great. Unfortunately, it’s painted in broad strokes with Hollywood-style “snappy” patter atop patriotic snare drums to catch the attention of gamers who usually snooze during cutscenes; yet it assumes its audience has been paying very close attention to minor story details and rarely (if ever) stops to explain the rapid-fire sequence of plot elements thrown out in each and every cutscene. This results in dialogue a bit too juvenile to cater to the people who are going to take notes on the finer points, and in details presented so briskly that the casual player literally needs a flowchart to keep track of who’s doing what, and why. 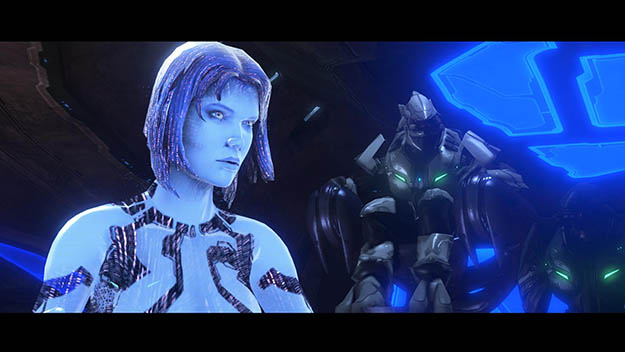 So, no, Halo 3 wasn’t exactly the narrative triumph of 2007, although the terminals went a long way toward proving that Bungie still remembers how to weave an interesting, enigmatic tale. But holy crap if it didn’t play beautifully.

Even that’s not without a caveat, unfortunately. Play the game on its default difficulty — a logical decision, given that “normal” suggests “this is the way the game is intended to be experienced” — and Halo 3 is a perfectly competent shooter with very pretty environments, acceptable enemies and entertaining weapons. But the word “normal” is a lie. Bump the challenge level up a notch, and suddenly the experience changes. Enemies become much cannier, much better shots, much stronger, and much more strategic. Suddenly you appreciate the environments as more than just pretty sun-dappled forests; they become vital shelter, each bit of scenery a potential safe haven from unseen snipers or that Brute captain who has a bandolier of concussion grenades with your name printed on them. The enemies become devious foes rather than mere fodder. And you find yourself choosing your two weapons very, very carefully to match each new situation.

So regardless of the game’s narrative shortcomings, irrespective of its less-inspiring-than-hoped multiplayer, all hype aside, Halo 3’s single-player campaign on heroic is one of the most challenging and rewarding game experiences I’ve ever had. It was hard — it was damn hard. But it never felt unfair; I never felt overwhelmed. Rather, the entire experience felt perfectly tuned and balanced, except for the fact that the first two levels are the toughest in the game, and the last two are the easiest. (What’s that about, guys?) It was the perfect length, too — long enough to feel complete, but brief enough that it didn’t feel padded.

No, it was just short enough to leave me hungry for a little more… which is inevitable, of course, given that the coda basically says “BUY HALO 4, COMING SOON.” But next time, someone else can write all those friggin’ articles. Turns out I enjoy Halo most from the outside.