Creative thinking is such hard work. So, I figured I’d wind down the year with the tritest thing imaginable, short of maybe a feature on gaming’s hottest imaginary women or something. Yes, it’s a “my favorite games of the year” series. Wow. Yeah, this one took me a while to come up with.

I wouldn’t do anything so pretentious as actually call these the definitive best games, though. Just my favorites. This is partly because I didn’t have time to play some of the potential game-of-the-year candidates, but mostly because my enjoyment was often not strictly commensurate with the scores I doled out. Besides, scores are stupid and turn everyone into complete drooling idiots. Can’t we all just get along?

I rather liked these games, but alas, I’m not done with either and hesitate to judge their replay value when I’m not even entirely sure they’ll hold up to a single playthrough. This is known as “being prudent.” Or… wishy-washy.

Avernum V is currently reminding me why I used to enjoy indie games, back in the ancient days when they were simply called “shareware.” Specifically, the latest Avernum descends from the elderly Exile series, which I played a bit of back in the dim and distant days when games were distributed on these things called diskettes. You younger types probably don’t remember them, but they were kind of like CDs, except flimsy, slow, low in capacity and incredibly unreliable. And really, Avernum V doesn’t seem to be wildly different from its ancient predecessors — its visuals are nicer, although hardly cutting edge. (I’d say they smack of a distinctly 1998 vintage.)

Yeah, not exactly cutting edge, but this is one of those games where the visuals don’t really matter so much. In fact, the minimalistic look lets the game get away with lots of visual shortcuts that speed up the gameplay; the characters don’t animate as they move about the world. They just sort of… snap to the next grid square. I can’t even imagine playing this game in a 3D engine — well, no, I can. It would move at about a third of the speed and be filled with ugly, ugly characters. Sometimes less is… well, if not more, then certainly not less.

Its story is rather more interesting than I expected, since it actually stars a party of adventurers in the employ of an evil empire but doesn’t seem likely to drift into the usual territory of “Uh oh, we’d better make a stand against our corrupt masters!” Rather, you’re hunting down a traitor who wants to overthrow the current reform-minded empress. But it’s presented in such a way that you can be a nice imperial minion and work for the benefit of the occupied lands you’re traveling through, or you can play to the people’s prejudices and be a ruthless bastard. It also allows for a few different mutually-exclusive story paths without being completely obvious about it. It is, in a nutshell, pretty good. 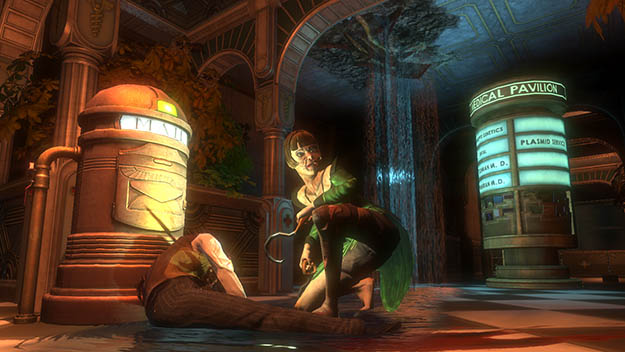 And, of course, BioShock. Do I have anything new and unique to add to the din of praise about this game? I rather suspect not. It is a bit slow to start, but once you begin tapping into the various available skills and customizing your character it really takes off. I do think the mutant enemies are a bit of a cheat to justify the fact that the character models are so much more awkward than the gorgeous art-deco world. But the important thing is that the story represents a sledgehammer-subtle critique of Objectivism, and is there anything more entertaining than dismantling the mad dream of a gender-swapped Ayn Rand?

I say there is not.

3 thoughts on “Another trite year-end “best of” countdown, part 0”