After yesterday’s minor tirade — a squall in an Internet teacup, really — I’ve decided that the ultimate fault for all of these non-functioning Mac games ultimately rests with MacPlay, a publisher with a terrible track record of keeping its releases current compared to other Mac publishers such as, say, Aspyr or Blizzard. So screw ’em — I’d rather deal with more reliable publishers. At the moment, I’m getting my old-school CRPG mojo on with the surprisingly engrossing Avernum 5. 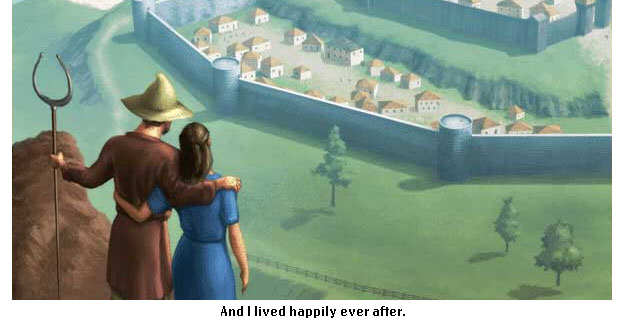 Of course, I’d rather be playing BioShock, since I’m already deeply engrossed in its wonders; I reached Fort Frolic last night. I wasn’t so keen on the first few hours of the adventure, but somewhere in middle of Neptune’s Bounty the game totally clicked for me. Alas, I’m leaving town for a week and don’t feel like dragging my 360 along with me (as I’m almost certain that subjecting it to TSA’s gentle ministrations is a quick ticket to a Red Ring of Death), so I’ve decided to hold off on advancing into the second half of the game until I’m back from vacation. With my luck I’d have to call it quits five minutes from the end of the game. So! Avernum 5 it is.

I am a little sad that my growing interest in CRPGs coincides with my becoming old and fat. I swear, what a cliché. Next stop: beard, then suspenders.

Other items of note: I managed to mail off the last of the spring cleaning packages today, or at least the ones that were paid for via PayPal. So you should see those by Monday. Exception: if you live in Mexico, I have not sent your stuff yet, because I dread dealing with the holiday season line at the post office desk. It’s madness. But I guess I will suck it up and deal with it tomorrow. Wish me luck.

Secondly, we recorded a new Retronauts this week due to our shockingly efficient ad sales team. I did not even realize that it was possible to convince an advertiser to buy time in a classic gaming podcast, but here we are, so bully for the ad doods. (Amusingly, we had a to do a second take on the ad, since Adam read “Atari 2600” as “Atari Two thousand six hundred.”) Personally, I was sort of hoping to hold off on recording a Retronauts episode for a few more weeks and get a fresh start on the show once our new podcasting arrangements are in place (early in January), but this worked out pretty well anyway, what with all the crazy Street Fighter IV info and series retrospective we’ve been publishing. I hand-picked a team of the four people at Ziff who are most into Street Fighter, and it’s the first episode ever in which my editing consisted of nothing more than inserting music — a really excellent conversation by people who know the games well but aren’t freakishly obsessive about them.

If nothing else, the podcast is worth listening to for the outro music. I’ve been sitting on that for ages, waiting for a moment to share it with the world. Seriously: best song in the history of forever.