My preview of Dragon Quest IV went up yesterday. I’m not sure what it says about gaming as a medium that seemingly half the “previews” I write are for games that are fifteen, even twenty years old.

Anyway. It occurs to me, as I juggle DQ4 and Mass Effect, that in the past year I’ve played a surprisingly wide array of games calling themselves “RPGs.” The former title, here, is the very definition of bog-standard Japanese RPG — which isn’t a criticism, really, as I’m enjoying it, but Dragon Quest is the foundation upon which most Japanese RPGs are built. (Except Final Fantasy and its ilk, as those always struck me as having come from a place that was more about dressing up the old Ultimas in Dungeons & Dragons‘ clothing. Or should that be “the old Ultimae”? Whatever.) Dragon Quest is RPG comfort food, and even if Square Enix wanted to innovate with it they couldn’t; witness the outcry provoked by the initial news of their intent to make Dragon Quest IX‘s combat action-driven and multiplayer. Japan screamed in anger, so they settled just for “multiplayer.”

Meanwhile, the latter — by which I mean Mass Effect, in case you find yourself confused by that last paragraph’s admittedly needless digressions — is very much a PC RPG trying to fit into the world of consoles. And not quite succeeding, I’m afraid. The shooty action bits aren’t as smooth as console gamers expect, while the dialogue has netted considerable criticism from PC-era BioWare fans who prefer the comparative richness of their older games. Something about it feels vaguely compromised — and for what benefit, I wonder? To judge by message board comments, a sizable number of console kids don’t “get” the game, not realizing that the meat of the game isn’t in the exploding of stuff but rather in the conversing with people. They’re the ones who are tossing around words like “overrated,” because they beat the game in 20 hours and didn’t bother with all the plot wrinkles as they were focused wholly on the shuddery, difficult-to-manage combat.

And being an adamant console kid myself, I feel well within my rights to regard them as dopes. Because here I’ve been dabbling more and more outside the narrow confines of Japanese console RPG design, and I’ve been loving it.

The most surprisingly excellent game of the year has turned out to be Etrian Odyssey — a Japanese-made console (well, portable) RPG, sure, but one unabashed in its emulation of old PC RPGs like Wizardry. (Old PC RPGs.) And it’s fantastic. The entire game has less plot than a single Mass Effect conversation, but the story that develops is the tale of the player’s team of warriors. (Various jackasses who name their party members after those characters’ primary action verbs notwithstanding.) Every narrow escape, every desperate dash through corridors crammed with high-level monsters, every square of virtual graph paper you mark off further endears your speechless combatants to you.

Curiously, I’ve found this sort of role-playing every bit as compelling as Mass Effect’s — those little cartoon people are my loyal acolytes. Except maybe the Dark Hunter, he’s sort of unsettling. And unlike most story-heavy games, ME does let you define your character through her (or his) background, and through his (or her) responses and decisions. I was looking at pictures of other players’ custom made Shepards today and found it rather off-putting — none of those were the real Shepard, because Shepard is an angular-looking career warrior named Yukiko, a first-rate sniper whose moral fiber is outstanding. Well, as outstanding as a sniper’s moral fiber can be when their life is built on shooting people. I don’t know who those other Shepards are, but they’re filthy imposters. 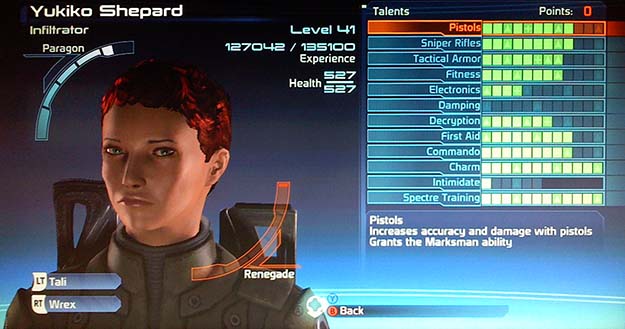 (OK, so my Shepard was admittedly just an attempt to create a grown-up version of Rorita. She’s a galactic hero now, folks.)

And then there was Izuna (a lightweight roguelike); Pokémon Mystery Dungeon (an even lighter-weight roguelike), Pokémon (a collection-driven battling RPG), Dragon Quest Monsters: Joker (Pokémon meets Dragon Quest); Final Fantasy Tactics, Disgaea and Jeanne D’Arc (fond remembrances of Tactics Ogre), Revenant Wings (almost, but not quite, an RTS), and about half a dozen remakes of old Final Fantasy games (uh, Final Fantasy games). Oh, and Chrono Trigger (pretty much perfection). And I still have yet to touch what is supposedly the best RPG of the year, Persona 3, which is somewhere between Pokémon, an old-school PC RPG, Final Fantasy and, uh, Bully.

So, the point of all of this is… that I still like RPGs after all, I guess. I had my doubts for a few years, there. But I suppose I was actually sick of formulaic J-RPGs, which is why I happily passed on Eternal Sonata and Blue Odyssey and regard Lost Odyssey with regretful trepidation. (I want it to be good, but….) I suppose ultimately I’ve been waiting for people to start taking more open PC-style experiences into the console world where I can enjoy them without having to prop open a keymap cheat card in front of my computer. And now they are! I’m thinking I might have to dabble in Windows a little to catch up on some of the classics, though — Baldur’s Gate, Neverwinter Nights, Planescape….

But let’s not do anything rash, here.