Meanwhile, in the world of GOOD games

I’m about 14 hours into Mass Effect, which according to people I’ve asked at work would suggest I’m nearly three-quarters of the way through the game. “It’s about, oh, 20 hours long,” they told me. In point of fact, I haven’t even finished the first of the three story missions that open up after taking care of business at the Citadel. Come to that, I had seven hours on my clock before I even left the Citadel.

The trick, of course, is that they were playing to beat the game (and no, I’m not talking about the reviewers, so please put away your Penny Arcade links). This is not a game to be beaten — it is a game to be played. I can only imagine that people who approach Mass Effect as a fairly straightforward action game probably hate it, because the “action” portions are… well, let’s be charitable. They’re pretty damn awful. It kind of tries to be a shooter but feels like Gears of War as programmed by a first year comp-sci student; it’s rooted in the RPG genre but lacks the input and feedback necessary to work effectively as one of those, too. When the bullets start flying, Mass Effect turns into an infuriating mess. Especially in tight corridors. 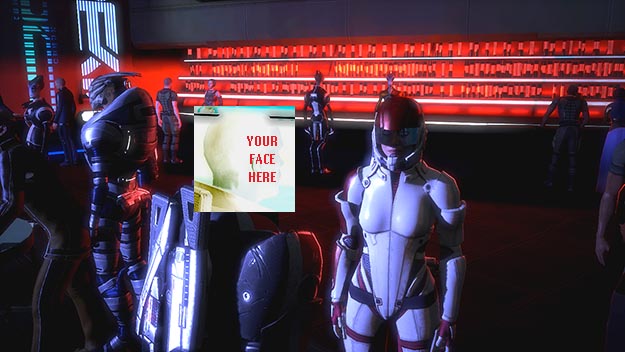 Fortunately, that is a very tiny portion of the game, and it seems to be pretty easy to level up a bit with skirmishes that make better use of the battle system — all those extra planets to explore usually have a few encounters in wide open areas, and my Infiltrator-class Shepard is a pretty good shot with a sniper rifle, neatly letting me take potshots from cover. So that’s good. It helps me appreciate what works about the game — namely, everything else, and most of all the actual role-playing part.

So many sidequests, and so many possible outcomes — it’s really quite impressive, especially the fluidity of the conversation system. I’ve seen more than a few movies that feel more stilted and unnatural than the branching dialogue in Mass Effect. Like I said a few days ago on 1UP Yours, it has some of the best writing I’ve seen in a game, and the spoken delivery sells it. I’ve essentially been playing my own personality (i.e. avoiding Renegade options whenever possible), but I have explored a few different outcomes to various situations and can’t help but be impressed by how differently they work out. Pick the Paragon option when a smuggler asks you to help him curtail the law and Shepard speaks with sharp indignation; break the law and she (or he, if you prefer) behaves furtively, eyes shifting left and right. (Or you could rip off the smuggler and sell his contraband directly to its intended buyer for even more cash.)

It’s a huge, involving game — not the best game I’ve played all year, since the combat feels so poorly conceived. But it’s certainly the most ambitious, and it’s a must-play for anyone who enjoys good, thoughtful writing. Like Final Fantasy XII, this is another of those games that makes it impossible to go back to the middling console RPG experience Japan’s been feeding us for the past decade or so.

18 thoughts on “Meanwhile, in the world of GOOD games”