Around the corner, or whistlin’ down the river

You know, the saddest thing to come out of all the Mario Galaxy hubbub over the past few days is the revelation that not enough kids know what West Side Story is. Bone up on your classics, kids.

Despite remaining confident that singing a bastardized song from an old movie musical about Mario is a terrible idea, I’ve decided not to go into hiding after all. I shall face up to the music, so to speak. 1UP Show producer Ryan O’Donnell let it slip that the whole thing was my idea, so I can’t pretend I was coerced, either. So, yeah. Just my luck to toss out a stupid idea that fell into line with something he’s wanted to do with the show for ages — an all-singing, all-dancing episode. I drew the line at dancing, though. Looking all mooney-eyed, Tony style, was disgraceful enough. 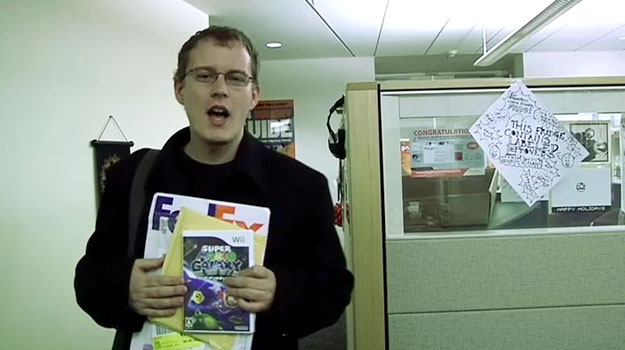 Still, I like the idea of “Second Street Story,” detailing the bitter feud between the Nets and the Sharkeys — employees of rivals C|net and Ziff-Davis, thrust by fate into a narrow corridor of the same block in the ghettos bordering San Francisco’s cutthroat financial district. On one side of the dividing line, the Nets believe that videogames are consumer commodities and should be evaluated accordingly, without regard for individual passion or interest. On the other side, the Sharkeys are hard-livin’ ruffians who see gaming as a personal, social experience to be extemporized upon from the heart. And the forbidden romance that tears them apart.

Of course, there will be songs.

See? Pure gold in the making.

28 thoughts on “Around the corner, or whistlin’ down the river”