Gunsmith Cats Burst Vol. 2 arrived yesterday, wrapped in what might be the most embarrassing cover I have ever owned. Guess I won’t be reading this one on the bus. 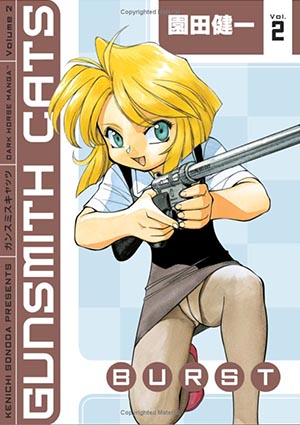 Or around other humans, ever. But I would like to commend Dark Horse for summing up everything wrong with manga through a single, pedophile-friendly upskirt drawing!

And what is wrong? Well, let’s begin with Dark Horse, the publisher that decided to go with an explicit-at-first-glance upskirt image of an underaged-at-first-glance girl on the cover of a book sold without a brown wrapper. Quality decision-making, there. Honestly, though, this actually isn’t so much a lapse in good taste as it is a lapse in backbone; after all, this image was featured on the cover of the original Japanese Burst Vol. 2 as well, and god knows that America’s whiny, obnoxious fanboys would write to Congress boycott Dark Horse forever whine endlessly on every anime message board on the Internet if the company dared to impose its own better judgment over the clearly infallible superiority of the Japanese creator’s tastes. (That’s “Sonoda-sama” to you, you unworthy chump.)

Yeah, far more contempt should be directed at the stupid, mewling fans who insist on literal localization, regardless of intent. Or social mores. Or common sense. Or even quality.

Of course, none of this would have happened without Kenichi Sonoda — “icky undertones” is his middle name. I mean, the guy has genuine talent, having designed some of the most iconic animated characters ever, including the Knights Sabers. But when you stop and look beyond the “cool comic about chicks who fight crime by driving and shooting” surface of Gunsmith Cats, it’s kinda shameless in being fantasy wish fulfillment for a very specific breed of Japanese nerd, the same set that Masamune Shirow caters to. (And belongs to, one suspects.) Witness the plight of this strain of otaku! Guns are outlawed in Japan, American muscle cars are prohibitively expensive, and for some reason girls don’t want to spend their time with someone who drops three months’ salary in Akihabara to buy life-sized action figures. The solution to this crisis? Comics like this. Comics where the only thing rendered with as much loving detail as the guns and the cars is the lingerie.

Then again, maybe it’s all just my own stupid fault. I should have known better than to buy Gunsmith Cats. I admire Sonoda’s art, which still demonstrates a strong ’80s ethos. He came into his own in a time when precise draftsmanship, obsessive detail and dynamic composition were more important than raw energy, giving his work a solidity lacking in most modern manga. Plus, the series’ focus on crime-fighting action in a Chicago setting is fairly unique in manga. I can overlook a lot of issues for great art and a fun story. But this may have been the pantyline that broke the camel’s back for me, since it made me really stop and think about the subtext of the manga. And you know, maybe I could live without a series where one of the leads ran away from home at age 13 to live in sin with a dude more than twice her age before becoming a call girl in Chinatown and taking growth-suppressing herbs to stunt her growth so her pedophiliac boyfriend wouldn’t lose interest in her.

Or is that just my old-fashioned side coming through? Anyway, uh, anyone wanna buy some graphic novels? Read once, like-new condition….