Last week was Manga Week, and I feel it is my duty to eulogize it.

By “manga week,” I mean that new volumes were published for an unusually large number of the few manga series I actually bother to keep up with. I really don’t read much manga, because I’m picky about how I spend my precious spare time, I detest anime, and it’s pretty tough to find manga that doesn’t just feel like anime in print. So when four volumes of my different series come out at once, it deserves memorialization. At least in a cursory sense. 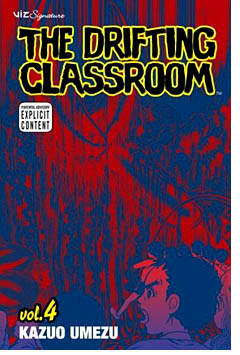 I first became acquainted with The Drifting Classroom several years ago when someone, I forget who, posted a link to scans of a doujin called Azumanga Daoih Drifting Classroom, which inexplicably placed the heartwarming cast of Kiyohiko Azuma’s four-panel comic in a dark post-apocalyptic scenario which involved a great deal of death and dismemberment. Bewildered, I poked around the Internet (back in the golden age before people thought it was the height of cleverness to call it the “Intertubes”) until I determined that the comic in question was a mashup of Azumanga with a classic horror manga whose name it had co-opted. So while this discovery didn’t make the doujin seem like a better idea, it did at least provide some handy context.

Obviously, when Viz decided to translate the original series, I jumped at it — partly to satisfy my curiosity, but also because I’m a closed-minded old fart who hates most manga and clings to the belief that the best work mostly lays in the past. By that logic, the older the manga, the better. When someone finally brings over a Genji Scrolls collection, I’m gonna be so all over that. I’m not sure I can actually describe The Drifting Classroom as “good,” though — it’s much too harrowing for that. It gets an explicit content warning not for sex or language but because it places an elementary school building full of children into a desolate wasteland where quite a lot of the cast freaks out and starts with the killin’. Little kids being hacked into chunks isn’t really all-ages type material, even if it is in black-and-white and they’re probably just using chocolate syrup instead of blood.

Volume 4 is actually the least-harrowing chapter to date, but that’s like saying a mild heart attack is only sort of cause for concern. By this point in the series, all the adults (read: teachers) have managed to die horribly except the psychotic janitor dude, who’s merely gone mad. So it’s up to the kids to take the reins and prevent the school from transforming into a large scale Lord of the Flies, minus the skewered pig heads of course. Not many pigs to be found in a bleak wasteland of sand. The creation of a de facto government provides the first respite the series has seen — several pages in which no one runs, shouts or dies! Quite a breakthrough.

Granted, the idyll is quickly shattered when the school is attacked by a giant invincible lobster-beast, and even once the kids figure out how to overcome it an even more horrifying threat rears its tiny, tiny head. So basically it’s like a sitcom where the status quo is restored at the end of every episode. Just keep in mind that the difference between Drifting Classroom and Full House, besides a merciful lack of Bob Saget or the Olsen creatures, is that the status quo is heartpounding terror and limbless first graders bleeding out on the floor rather than warm family togetherness. Too bad, really. Full House could have been so much more interesting.

Drifting Classroom is really a strange beast to be sitting alongside store shelves full of Naruto and Strawberry Milk Tea and whatever else kids are buying these days (or at least reading for free while sitting obnoxiously on the floor of Borders’ manga aisle). It’s awkwardly-drawn — Umezu is hardly the most fluid illustrator, and his work looks incredibly dated and stiff — and it’s unrelentingly grim, full of unspeakable horrors visited upon a few hundred children and their ill-fated guardians. Unlike most manga, though, it doesn’t glamorize the violence, and while it may give the youthful cast a little too much credit for scholarliness (the makeshift student government is patterned after what the sixth graders learned in Social Studies — whatever. I refuse to believe even Japanese kids are that dedicated to their stidies) it’s still a compelling read. For one thing, we’re about 700 pages into the story and it’s all happened in the space of a day or two, yet the pacing is breakneck and there’s a real question of how things are going to turn out. A school packed with hungry children is stranded in an endless, dead world, and there’s only so much food and water to go around. It’s difficult to imagine the story ending with everyone slowly starving to death, though, given its breathless rush of events. So I’ll stick around if only to see what fate does befall the drifting classroom. And whether or not Chiyo-chan puts in an apperance. Maybe she’ll airlift everyone out via pigtail express.