So! Portrait of Ruin. Very good, falling a bit short of great. I have, nevertheless, been determined to squeeze my $35’s worth of entertainment from my copy of the game, a process I have set about with rather grim scientific precision. Filling the bestiary (including drops), mastering every subweapon I can find, completing every quest, even filling out that interminable list of items. I’m not sure I can really refer to this experience as “enjoyment” anymore, although there is certainly a dark satisfaction in knowing that each minute I play brings me a little closer to splaying this creation wide open like a pinned butterfly.

Fortunately, I did encounter a little Christmas cheer when I took a moment away from my mechanical handiwork to cruise through the Sisters mode. It’s this little bonus that caused me to score the game as highly as I did — sure, it’s an incompletely developed bit of fluff, but the novelty of playing a Castlevania game entirely with a stylus (and controlling the villainesses to do it) simply can’t be denied. Along the way, I inadvertently stumbled across the greatest Castlevania thing ever: a minigame I like to call “Zombie Blaster.” 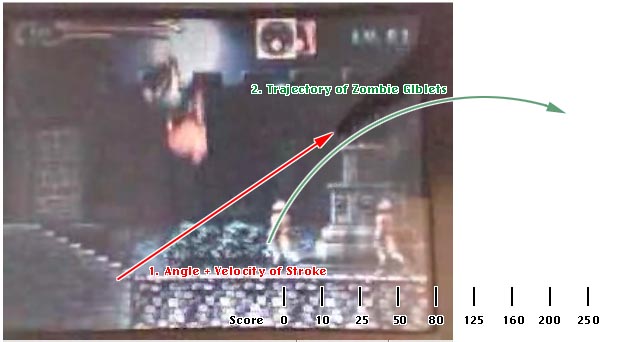 One of the most impressive details in Dawn of Sorrow was the fact that certain crumbly enemies and destructible objects would do their crumbling in accordance with the way in which you attacked them. Strike a zombie with a horizontal sword slash, for instance, and its upper half would detatch and fall while the legs stood a moment in confusion; but smash it with a hammer or great sword and its body would shatter, its individual zombie chunks being blasted into the ground at an impressive velocity.

But this quirk of game physics didn’t truly come into its own until Sisters Mode, where Stella’s slashing attack causes zombies and skeletons to disintegrate like most of the Dawn weapons did. But since her attacks are controlled by stylus, they can come from any direction… and at any velocity. A gentle little swipe from the side will destroy a monster much like Jonathan or Charlotte’s attacks. But a fast stroke from below will cause its dismembered bits to fly into the air. And thus begins the game of Zombie Blaster.

The goal of Zombie Blaster is simple enough: try to get as much giblet air time as possible. Ideally, you’ll want to use a quick 45-degree-angle stroke from below. The best place to play is in the Ghoul King areas of 13th Street, and you definitely get bonus points for flinging zombie bits all the way across the courtyard. Double if it’s a Ghoul King.

Sadly, this is simply a makeshift experience and works entirely on the honors system for now. But next time I interview him, I’ll definitely ask Koji Igarashi to implement some sort of scoring system in his next DS game. No, seriously. It’s going to be awesome.

16 thoughts on “Castlevania: Blaster of Zombies”