Say, uh, it’s been a while since I last updated, eh? I blame Rogue Galaxy, which I’ve been playing through for review. (Not the big review, so haters take heart! My score won’t count.) 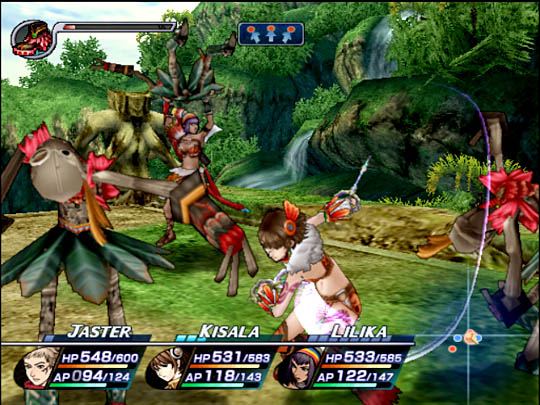 Rogue Galaxy is like a mashup of Skies of Arcadia, Kingdom Hearts and FFXII, but not quite as good as any of them. Well, OK, it’s better than Kingdom Hearts. Like that’s so difficult. The disparity in quality between Level 5’s various projects makes me realize they are less a developer and more a tool, and the outcome of their work depends entirely on the skill and involvement of their current publisher. I’m sure Dragon Quest IX will be totally great, because Yuji Horii is way more anal and controlling than Sony. You can’t say that about just anyone, you know.

Anyway, the real reason posts have been so few and far between has more to do with the fact that what little free time I have is squandered browsing the forums. Yes, the site is being undermined from within. So far I’ve been most impressed by everyone’s eagerness to take my demands for an “all-singing, all-dancing, all-haiku” translation of Final Fantasy VI. It’s been short on the singing and dancing so far, and that’s probably to everyone’s benefit. But the haiku is flowing like… like funky flow.

Katarin’s pregnant.
What am I supposed to do?
Mobliz has no jobs :(

Finally, there’s my own humble entry, which I forgot to post in the thread. Luckily, I have no compunctions about abusing my “only person who can post on the main page” privileges to place it here:

Anyway, as soon as our rain lets up I’m mailing all those Crap I Want to Sell packages. They’ve been sitting here for a few days, but the post office is a long walk from here and I don’t want everyone’s stuff to get soaked along the way. I’ll be shipping priority, though, so everything should be there pretty dang quick, like.