Too much of Mii

Well, it looks like there’s a limit to the total number of Miis you can have on a given system: one hundred. I learned this the hard way when I hit the ceiling this morning and a bunch of Miis that had been sent overnight refused to arrive. I’ve had to make some judicious deletes — mostly to some of my own Miis, or various duplicates people have sent. Apparently everyone really likes making Michael Jackson and Jesus.

Anyway, at this point I need to ask that everyone be more selective in what they send my way. For instance, I recently received about eight characters from a single person, apparently that guy’s entire family, and that’s maybe a little too many. I’m sure your mom is nice but I don’t know that I need her hanging out with Clint Eastwood and Mr. Saturn.

Actually, it’s not quite true that you can only have 100 Miis on a system; the Mii Parade can presumably host another hundred. Mine is currently up to 82, so I should find out soon. The parade was sort of dopey when there were only two people trudging along, but I have to say that it’s much more impressive in its present form.

Anyway! I decided to do the FFXII thing this weekend rather than the Lunar Knights thing. I’m now 50 hours into the quest and… hmm. Looks like about halfway through the actual story… and I haven’t even hunted down a third of the Marks yet. Normally when a game stretches this far along with no end in sight I start to get a sense of “OH GOD WHEN WILL IT END,” but the more I play of FFXII the more the fires of my addiction are stoked. The last game that had this effect on me was FF Tactics. I sense a trend! 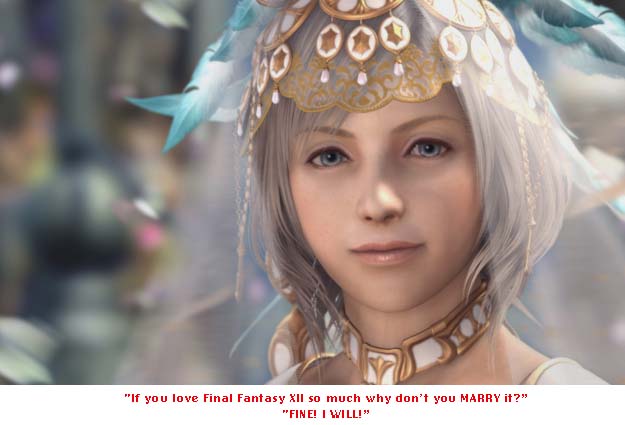 I should probably be a lot further into the main story of the game, but a few days ago I headed to the Henne Mines only to discover that I was slightly underleveled; after spending an hour fending off constant bat ambushes my party was starting to wear down and I beat a retreat to a save point so I could regroup and do a little powering up. But then I happened to talk to some random guy in Rabanastre who ended up leading me into a seemingly insignificant subquest which ended with me battling a boss (only the sixth battle so far to have the BOSS energy meter at the top of the screen) which in turn opened up a path to massive areas of Ivalice which had previously been inaccessible. Which in turn set me to exploring new territory, finding new gear and completing various subquests, at which point I realized I was probably strong enough to go after a few of the currently-available Elite Marks. And before I knew it I’d spent 12 hours distracted from the main storyline… and still have plenty of other things to do before all that’s left is to tackle the mines again.

And that is why FFXII is awesome: it offers the openness of an MMO or American RPG with the streamlined interface and visual beauty of a Japanese RPG. And a solid story with good characters. And occasional mockery of the FF Tactics script. Oh, FFXII, is there anything you can’t do? Besides my work, I mean.