Yasumi Matsuno: Not dead yet

OK, blah blah Wii price, launch date, release schedule — who cares? The big news to come out of the global Nintendo conferences going down today (besides the fact that extra controllers are gonna set you back a preposterous $60 apiece) is that Ogre Battle/FF Tactics/Vagrant Story/FFXII creator and genius-at-large Yasumi Matsuno is still alive. And he loves Wii.

OK, so maybe that’s a slight exaggeration; I don’t suppose anyone thought he was actually dead. But there has been substantial doubt as to whether or not he would continue working in videogames after his much-rumored breakdown and departure from FFXII; besides some suggestions that he’s hooked up with other FF refugees over at Mistwalker, there’s been no indication that he had any intention of picking up the reins of near-perfect game design again. Certainly Square Enix hasn’t said a thing besides “He’s on indefinite leave.” (That’s one step removed from “No comment” in that crazy little world we like to call PR speak.)

Apparently they didn’t say who Matsuno is working for now, just that he’s all mushy and affectionate about Wii. Which makes perfect sense — if he really did flip the hell out under the pressure of making FFXII about five times more awesome than the PS2 can theoretically handle, a development environment in which it’s technically impossible to ride the bleeding edge would probably be much easier on his sanity and nerves and so forth than, say, PS3, whose development environment reportedly makes the infamously complicated Saturn look like a stroll through BASIC. Of course, this means the short list of worthwhile creative minds at Square Enix keeps getting shorter; I hear tell that the new Final Fantasy XII spin-off is under the supervision of one Tetsuya “Zippers!” Nomura, which I guess would explain why Panelo now looks seriously underaged and sleazy instead of slightly underaged and modest. 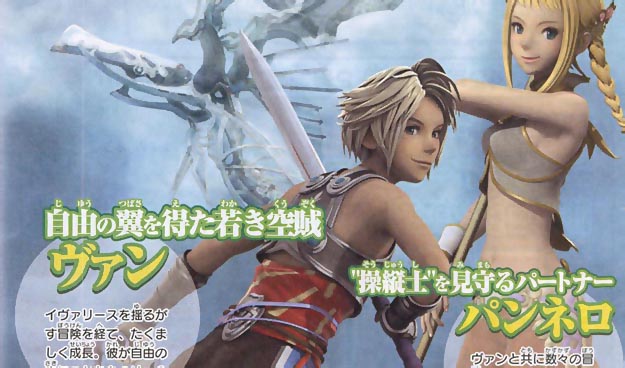 I realized the other day (while debating the merits of FFXII with Tycho in the wake of the hilarious but deeply offensive Super Mario Bros. XII comic) that much of why I love FFXII has to do with the fact that it is the final game to have been conceived by the “old” Square — that is, before Square became Enix’s Final Fantasy-flagellating subsidiary. Matsuno’s departure sort of seals that, and I certainly do hope he drags Akihiko Yoshida along with him for art duties. Because Matsuno minus Yoshida just seems wrong, somehow.

Anyway, I gues this means at some point he’ll direct a new game and we can have a Retronauts video session to gush about his glory. Yes, I think about everything in terms of what it means for my self-indulgence.
In other news, our dear Nich has gone over to the dark side with a foray into New Games Journalism: a review of Cooking Mama’s manual. Brilliant, seriously brilliant. Today’s must-read!

Special bonus: two-player cooperative Gergoth-killin’ confirmed for Portrait of Ruin. Truly, Konami understands what friendship is all about.

38 thoughts on “Yasumi Matsuno: Not dead yet”