I just got back from Konami’s annual BBQ event and boy are my arms — no, no, never mind.

I was only really interested in Lunar Knights and Castlevania: Portrait of Ruin, and handily both were playable. They are both pretty great, which became today’s recurrent motif.

I cornered Ryan Payton from Kojima Productions to grill him about the recent revelation that came from Konami’s official Japanese Lunar Knights site — i.e., not only is the game called Boktai DS in Japan, main characters Aaron and Lucien are in fact just redesigned versions of Django and Sabata. These “Aaron” and “Lucien” names are but mere flights of localization fancy, and even Ryan admits he keeps calling the characters by their original names. It’s a very odd turn of events — it’s one thing for a US publisher to make name changes to a game when it first comes over, but I can’t recall a faithfully-localized series being completely reinvented midway through. I’m sure this will cause no end of heartburn among a certain contingent of people, although it doesn’t actually change the game itself… which is still Boktai, except without the troublesome solar sensor elements. So that’s pretty great. Plus you can rename the characters back to their original monkers if you’re that anal about it. In fact, you can rename them anything you like. I recommend “Ruff” and “Tumbull” to capture that “doomed low-budget Cartoon Network show” vibe. 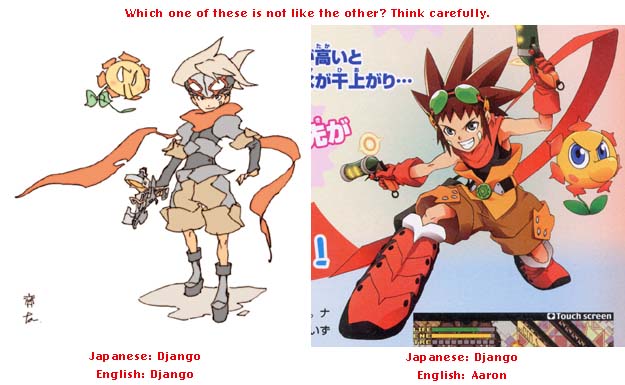 I’ll probably have some detailed previews up at 1UP soon. In the meantime, check out my insanely lengthy Rocket Slime U.S. version hands-on write-up. The length mainly comes from the fact that it’s about 75% E3 developer interview by mass — since almost everything published during E3 is immediately lost to time, I held on to the interview until now. It was a pretty great interview, which means it’s a pretty informative preview via the transitive property of… uh, something or another. Maybe you should read it, because it’s also a pretty great game. See how that works?

Edit: The Portrait of Ruin preview is now available for your perusal. I tried to do something different and be positive for once, and already a thumbs-down response for my troubles. I guess I should stick with dourness.

Just as soon as I’m done with this Lunar Knights preview.