A study in despair

I have terrible news, everyone. If any of you buys Dirge of Cerberus this week, or ever, I’m coming to your house. And then, I’m going to hit you so hard that the only thing you can taste for the next year is your own blood.

I don’t care how big a Final Fantasy fan you are, or how much you think you like FFVII (poor soul); giving Square Enix your money for something this abysmal is only encouraging them to continue abusing consumers. There’s, like, a million other Final Fantasy products due out this fall anyway, all of which are objectively better than DoC — FFXII, FFIII for DS, FFV Advance. Heck, even Mario Hoops. Better yet, buy Rocket Slime and encourage the propagation of charming Dragon Quest spin-offs in lieu of soulless FFVII spin-offs. It’s probably bad news for Square Enix when TOSE is making better use of their properties than their own internal teams, but there you have it.

And don’t even think about using “But I want to learn more about the back story of FFVII” as an excuse. One, FFVII’s story wasn’t worth investigating beyond what was in the game. Two, DoC barely touches on the actual substance of FFVII. Three, the FFVII connection alone means that a gracefully-flowing plot is impossible, even if you were to stick a pacemaker in it. 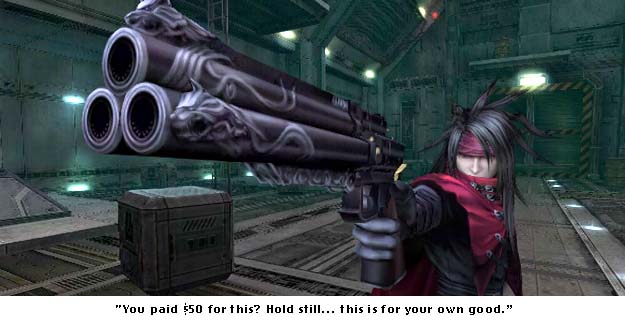 I guess what I’m saying here is that there are too many good games in the world to squander your time and money on the bad ones. So don’t let those pretty CG graphics trick you into a fanboy froth, because you’ll only regret it later. You know, when you desperately want to resell the game but can only get ten bucks for it because the secondary market is already glutted with copies dumped by others who made the same mistake as you. It only took a week in Japan!

Anyway, this completely unrelated feature is easily the stupidest thing I’ve ever created. But that was kind of the point, so I guess it’s a success?