Well, that was all very silly. Oh, Internet, you are so very temperamental.

I’ve been meaning to write about a book I read recently, having picked it up on a whim after some other blog dude mentioned it. Probably Danc at Lost Garden, but it’s early in the morning and I’m too groggy to look it up. It carries the deceptive title of Character Design for Mobile Devices, but do not let that fool you — it is in fact a 150-page love sonnet about sprite art. 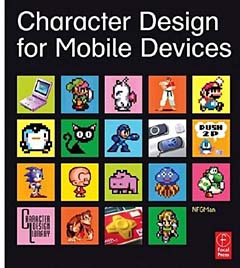 The book does pay special attention to portable systems and mobile phones, since that’s about the only place you’ll find bitmaps being crafted these days, including a detailed if not-quite-comprehensive history of handhelds. It probably could have used a little editing since the author has a tendency to write something, and then write almost exactly the same thing a few pages later; also, there are quite a few captioning goofs. Minor problems, though, for a book that basically exists to say “look at the beautifully-made pieces of pixel art. Please do not let this art form die.”

I guess it’s even more appropriate to write about this today after all the Ultimate Ghosts ‘n’ Goblins hand-wringing, since UG’n’G criminally replaces the series’ intricately-crafted bitmap art (always among the best in its time) with poorly-made polygons. This judgement is based not on nostalgia seeing as I have no strong feelings about the series one way or the other; rather, it’s derived from a simple appreciation of things that look nice. Stiffly-animated, badly-textured 10-poly character models buried beneath garish lighting effects: not so nice.

6 thoughts on “SO ANYWAY”