I completely forgot to update during my period of post-E3 decompression about the best thing to happen at the entire stupid event. See, at the 1UP members-only party, Wes Ehrlichman of The Gamer’s Quarter gave me a box of condoms.

While that action alone would be creepy to the point of terrifying, it was the brand of condoms that made the difference. Yes, Golgomania has now become full circle: I own a box of Golgo 13 prophylactics. 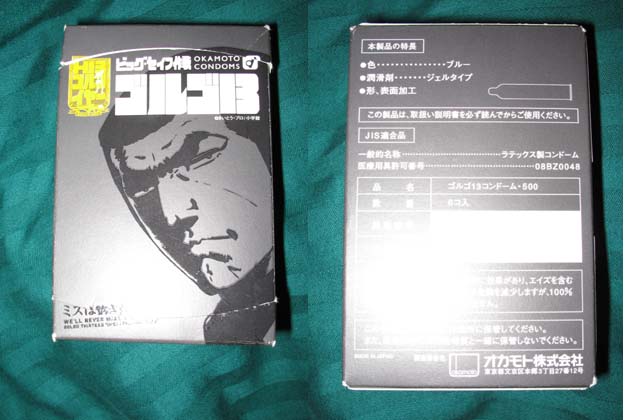 Having stumbled across these things when I went to Japan a few years back, I’ve since kicked my brain repeatedly for being too bashful to buy a box at the time. Thanks to Wes’ grossly inappropriate gift (the box was already open, for that extra touch of ewwww) my love of insane novelty has been fulfilled. These things are great. Er, well, I mean the packaging is great. I won’t actually be using them, for far more reasons than I have space to enumerate.

Highlights: crass multilingual innuendos making the obvious connection between sex and Golgo’s preferred M.O. — note the condom illustration on the back of the box which happens to look remarkably like an M-16 shell casing. And the front of the box says in English: “We’ll never make a bad shot.” But the best part is the somewhat obscure pun about these being for “big safe capers” — “Big Safe Caper” being the title of the very first G13 story from 1968. In that case, the safe was a vault; here, of course, it refers to safe sex. Which really just goes to show that no matter what the property, no matter how “adult” the ancillary merchandise, anime-branded collectibles are inescapably nerdy.

Completely brilliant. So thank you, Wes Ehrlichman, for having sufficiently poor judgment to think an open box of condoms is a suitable gift for a complete stranger. You rule.

For your consideration, geekiness of a more family-oriented nature: a random yet completely great comic I stumbled across yesterday. Sadly, a cursory glance of the archives suggests that the rest of the comic is fairly mundane. But in lieu of other comics about pink-haired girls with a fondness for Katamari Damacy, perhaps you will feel otherwise.

In sadder news, one of the site’s latest referring search strings is “Neil Peart naked.” Come on, Internet. I expect better than that. Even from you.