I was heartbroken to see my site turned into a discussion forum for Smash Bros. of all things. Really, you guys should know better. When people rib me for being “too much of a Nintendo fan,” I can always invalidate their criticism simply by mentioning my all-consuming antipathy (also: venemous hatred, sneering contempt) for that particular “game.” [1] It is an orgiastic expression of fanservice, and apparently the litmus test by which Nintendo’s Treehouse sorts out worthy employees.

As for why Solid Snake of all characters is the series’ first third-party cameo, I have a theory about this. See, Smash Bros. Brawl won’t be Snake’s first fighting game appearance; he was in Hudson’s DreamMix TV, a sort of poor man’s Smash Bros. clone by Hudson. Thanks to Hudson’s various connections (owned by Konami, and Takara something something) this was a fighting game in which Snake could actually go mano a mano versus Optimus Prime.

Let that sink in for a minute there.

How do you make a bad game out of Snake punching Optimus Prime? I don’t really understand the science behind it, but Hudson succeeded with flying colors. DreamMix is garbage even by the low button-mashing-spazzery standards set by Smash Bros. So my theory is that Kojima figured if his big breadwinner is doomed to be in crappy fighting games, he might as well be in one that people will actually play.

At least the end of that MGS4 trailer makes sense now. 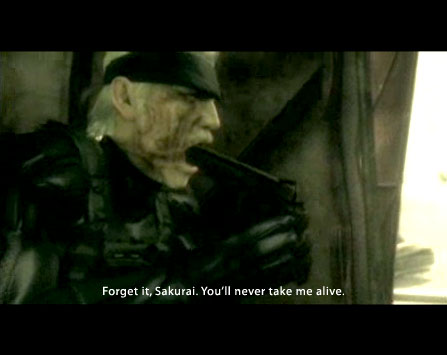 Yeah. All told, I don’t think it’s been a very good E3 for Snake.

[1] Then again, I think my dreams last night revolved around Super Paper Mario imagery, so what do I know.