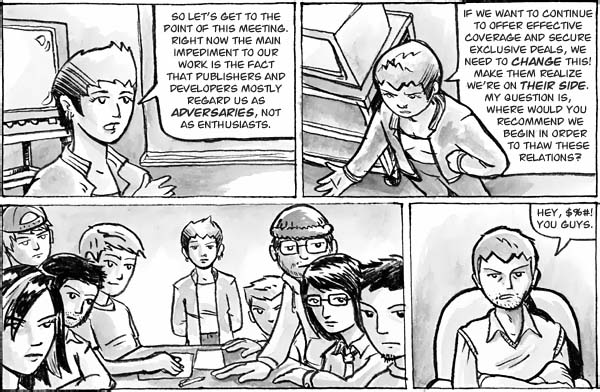 Working in the videogame press is not a career choice that commands respect, and I say this without a lick of self-pity (because, you know, getting paid for playing Katamari all day or whatever is hard to complain about). Gamers generally regard magazines and websites as a necessary evil, since they have all the big scoops on game releases and can offer at least a general sense of a game’s quality through reviews. Developers generally regard magazines and websites as parasites, making a living off of other people’s work (frequently belitting it in the process).

In fact, I believe the only people who like the gaming press are advertisers. So you may hate me, but Nuvaring thinks I’m completely awesome.

Anyway, it’s not at all uncommon for a single review (or even a single injudicious comment in a blog) to spoil a publication’s relationship with a publisher or developer. That’s why people who refuse to fall in line with their publication’s prevailing editorial mindset are taken behind the building and beaten on a regular basis. You should check out my scars sometime.