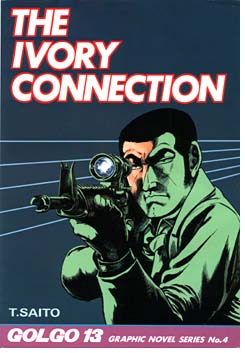 Apparently Golgo-13 makes his long-overdue (?) return to the U.S. this week in the form of a Viz-published graphic novel called “Supergun.” Given the nature of the series, there’s a 50% chance that the title refers to “Little Duke” and not some sort of ultimate weapon.

Anyway, the point is: Time for another installment of Perfect Machine of Snipe.

The fourth and final volume of Leed’s 80s-era run of Golgo-13 graphics novels was called “The Ivory Connection.” It manages all at once to include one of the most enjoyable G13 stories I’ve read… and also the most completely repulsive. It’s a pretty well-known fact that Takao Saito’s name on the cover is more a stamp of approval than actual authorial involvement; Duke Togo’s adventures are mass-produced by a studio of young men carefully trained to mimic Saito’s artwork, and nowhere is that more obvious than in The Ivory Connection. The first half of the book, an eponymous globetrotting story, features a restrained art style with crisp, controlled linework and fairly elegant figures. But the second story, “Scandal! The Unpaid Reward,” has a look as lurid as its title, with thicker inking and cruder anatomy. Also a lot more smirking.

The first story is another one of those overly complicated tales in which Golgo-13 runs several scams concurrently for no real reason, since in the end he just blows away the bad guys with a very direct bullets-to-brains approach. But unlike the ludicrous plot of Galinpero, there’s actually a point to this one: The WWF (World Wildlife Foundation, not the former wrestling league) contracts G13 to bust up an ivory poaching ring. And not just to take down the poachers, but to ruin the entire ivory underground. All for the paltry sum of 20,000 pounds sterling. 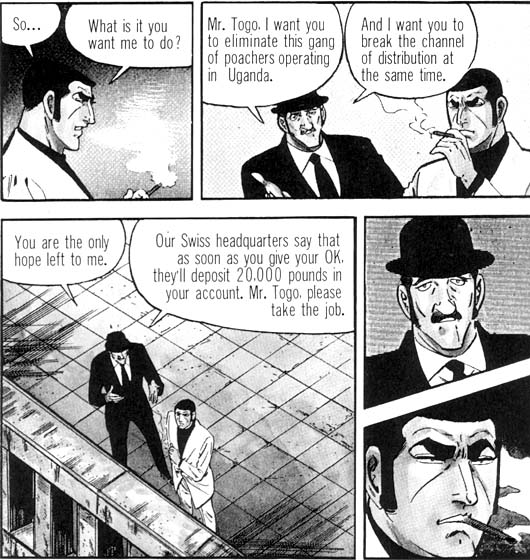 So he goes to Africa while pretending to be Chinese, which for some reason involves a group of killer mercenaries that seems to have nearly nothing to do with the main plot.

Togo meets up with the local authorities to check out the most recent elephant kills, then hooks up with the poachers under the pretext of being a Hong Kong black market buyer with plenty of money to throw around for fresh ivory. But snap! This is actually a cover so that he can drop some flesh-eating bacteria in with the poachers’ shipments, which then do their thing and slowly rot the ivory in transit. 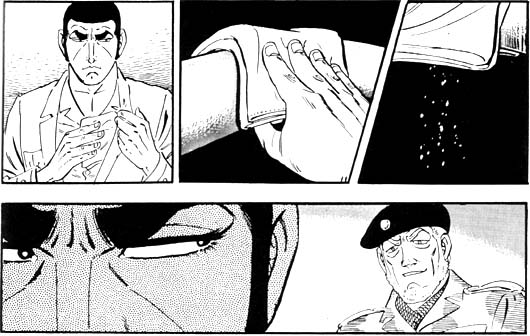 His stealthy work completed, Golgo takes out the poacher group with a grenade disguised as a pack of cigarettes. The coda: A very angry Hong Kong ivory buyer explains to the poacher leader his dissatisfaction at dropping huge money for a shipment of wormy goods. The end: Golgo stoically calls it a night, having done a good deed for a dying species. Aww. 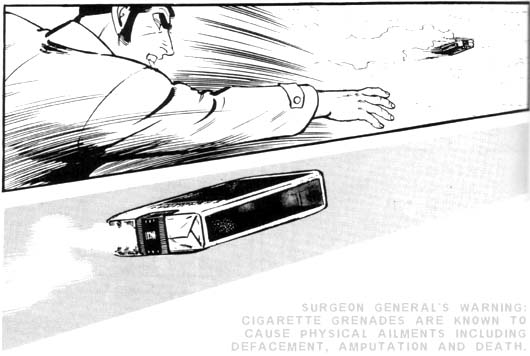 Any good karma Golgo might have racked up in the first chapter is utterly squandered on the second. Scandal! is pretty much the un-feel-good story of the century. And it was written last century. It’s just that awful.

The story begins in Germany, where Togo takes a contract for an old man who used to be an anti-Nazi underground resistance fighter. That’s good, right? Well, no, because the old man is every bit as horrible as any Nazi ever to have their skull perforated by a custom M-16. Annoyed that G13 insists on playing by his own rules, he decides not to pay the contract in full. And we all know what happens to people who back out of an agreement with Togo. Like everyone else in this series, they end up returning to the great circle of life. 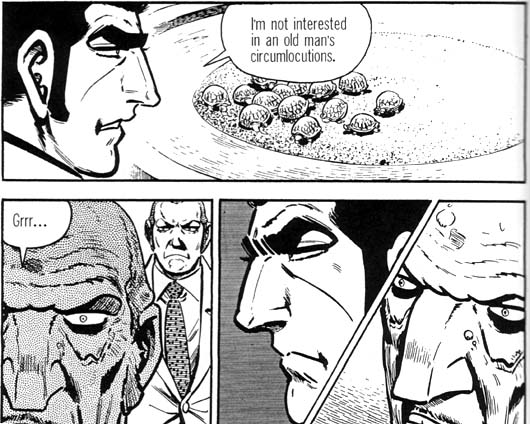 It’s the details of the contract that make the story so unsavory. The old guy wants to earn his group a government bid, so he decides to bump off his number-one rival. But he decides to do it in a way that will completely discredit his opponent, which in this case means slipping the unsuspecting sap a powerful hallucinogen combined with an aphrodisiac — and then, when the victim tries to take sexual advantage of his daughter-in-law in the throes of drug-induced mania, Golgo drops by in a helicopter and snipes a chandelier which skewers the both of them.

This is what is known among decent human beings as “vile.”

Even the filler plot material is crap. The secondary plot hook for Scandal! is that the old dude’s assistant, a beefy mook by the name of Uther (or Frederick or something equally generic in a German vein) whom the geezer had once saved from a life in the Hitler Youth, claims to know Golgo 13’s hidden weakness and intends to exploit it to make sure the old fart is safe.

But it turns out his “big secret” is that he’s discovered Golgo 13 is such a finely-honed machine of snipe (perfect, one might say) that he reflexively beats the crap out of anyone who tries to get the drop on him from behind. This was revealed in the very first scene of the very first chapter of the series, way back in 1968… so, you know, some big secret. Gunther arranges to have some other guy attack Golgo from behind, allowing him a split-second to plug Golgo while he’s busy karate-chopping the dupe. Naturally, rather than pump the world’s greatest assassin full of lead in that carefully-planned moment of distraction, Dieter decides to monologue about how clever he is. So Golgo kills him. Sheesh. 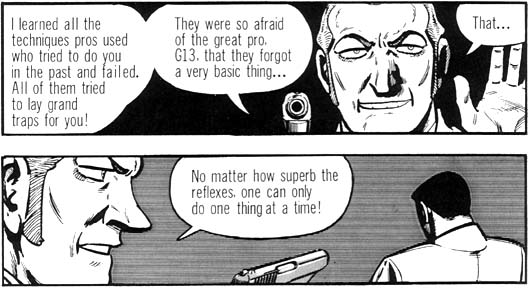 Oh, and when the old man tries to defend himself against G13’s implacable, impassive wrath, he accidentally skewers his young grandson on a sword. Horrible.

I guess what I’m saying is, don’t read Scandal!

I hear tell it’s not in Supergun, though, so do your part and support classic (albeit amoral) manga and pick up a copy if you see it.